Outstanding course feedback
Average score 9.43/10, based on our 2,064 latest reviews
If you found this blog useful and you’d like to say thanks you can click here to make a contribution. Thanks for looking at our blogs!

An earlier part of this blog showed how to select multiple controls at the same time, and explained that the one with the white borders is the dominant control (and what this means).  This webpage shows how to align, distribute, center and otherwise arrange controls, and also how to group them together.

Aligning Controls to Each Other

To align controls, select them and choose the right-mouse button options shown below: 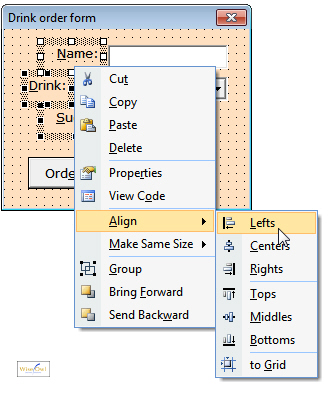 Here the Name: label is the dominant control, so selecting Lefts as shown will align the selected controls to its left edge.

In the form below, the controls need distributing equally: 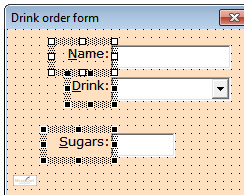 The control would look better equally spaced in this case.

To do this, select the controls as shown and then choose one of the menu options shown here: 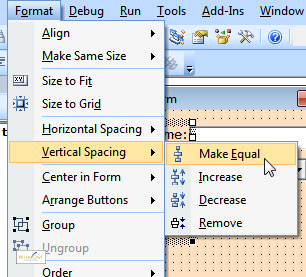 The option shown is the one we want in this instance, but it's reasonably obvious what the others would do.

Note that in this case you would then have to do the same thing to the textboxes/combobox, to get them to align in the same way.

Making Controls the Same Size as Each Other

Here's how to get 2 or more controls to have the same size or width: 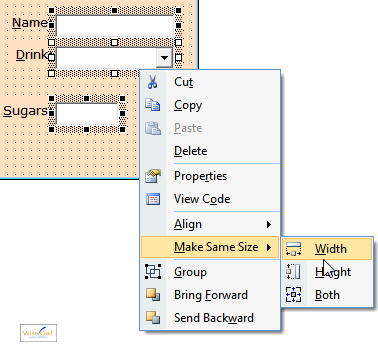 Select the controls, then right-click on one of them and choose the menu option shown here.  The Drink combobox is the dominant control, so the other two selected controls will be resized to have the same width as this one.

When you've drawn part of a form, it's often useful to group its controls together so that they behave as a single control: 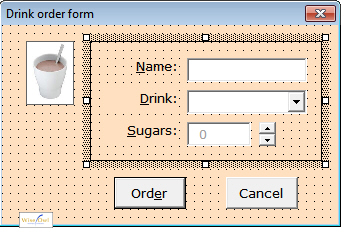 Here we want to group all of the controls in the frame together so that we can move them around as one.

One way to do this is to select all of the controls and group them together:

Even after grouping controls together, you can still format individual controls within the group separately, so you get the best of both worlds.

You can ungroup grouped controls in the same way: 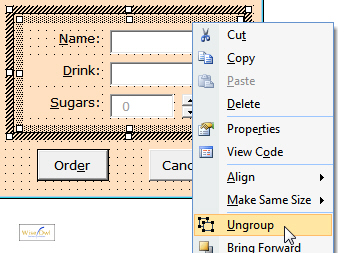 Right-click on a grouped set of controls and choose to ungroup it as shown here.

An alternative way to group controls together is by creating a frame to hold them.  First cut any controls you want to appear on the frame:

Select any controls you want to group together, and cut them to the clipboard.

Click on the Frame tool, and use it to draw a rectangle: 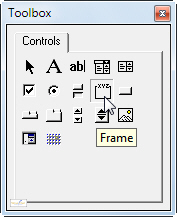 Click on this tool, and draw a rectangle for your frame.

You can now delete the title of the frame, and paste your controls on to it:

Delete the Frame1 title (it's the Caption property of the control) to make it look tidier, then paste the controls from the clipboard onto the frame (make sure you have it selected when you do this).

Result: wherever the frame goes, so too do any controls sitting on it:

When you move the frame, the controls on it move too.

You could always set the BorderStyle of the frame to frmBorderStyleNone to hide its border, if you don't want to see the rectangle.