Copy, rename, delete and move files and folders
Part two of a three-part series of blogs

By referencing the unintuitively named Microsoft Scripting Runtime object library you can write VBA code to access files and folders on your hard disk. This blog explains how, and gives a couple of worked examples.

This blog is part of a complete Excel VBA tutorial. We can also provide training in person, either on one of our Excel courses or on one of our VBA courses.

The Problem (and Algorithm to Solve it)

Suppose that you know one of your workbooks in a folder contains the name of your dog (let's say he's called Fu-Fu), but you can't remember which.  Here's an algorithm to find him:

Now that we've written our algorithm, it's time to code it!

A Function to Test if Text Exists in a Single Workbook

The first thing we'll do is to create a function which will take any Excel file on the hard disk, open it, look for the hidden text in all of its worksheets and return True or False depending on whether it finds it or not:

Function IfSearchStringFound(ThisFile As File) As Boolean

'open this workbook (using full file path so can find it)

'look for the hidden text in each worksheet

For Each ws In Worksheets

'(this command obtained by recording)

If FoundCell Is Nothing Then

'if no cell pointed to, text not found

'if we've found a cell, display it

'whether we found the text or not, close the file

Note that the function tidies up after itself (it closes down the workbook that it's opened).

The Main Routine to Loop Over all Files in a Workbook

Our main routine includes error-checking to see if the workbook referenced actually exists:

'a reference to the folder containing the files

'a reference to each file in the folder

'the name of each file in the folder

'we're looking in one particular folder,

'so try to refer to it

'if we get here, we've got a folder - loop over

'all of its files

'for this file, see if it's a workbook

'it's a workbook, so open it

'if we've found what we were looking for,

'for all other possible files, just ignore them

'no errors - can finish!

MsgBox "No text found in any of the files!"

MsgBox "Can not find a folder with this name!"

This routine will loop over all of the files in the specified folder, but only try to open the Excel ones: 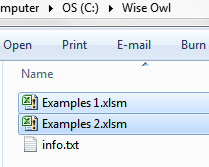 For this example, the macro will open the files shown selected only, since they are the only ones whose file names end in .XLSX or .XLSM.

Results of Running the Macro

If Fu-fu is indeed hidden somewhere in a cell in one of the workbooks in the folder given, the macro will display this:

An example message displayed by our macro - here Fu-fu was well hidden!

If, on the other hand, there is no Fu-fu, you will see this: 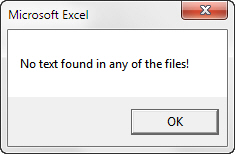 The message yoi'll see if none of the workbooks contains the hidden text.

That's the end of this worked example - the next one shows how to find all of the files on your hard disk whose names contain a certain string of text.