Imagine an alternative universe in which Nigel Farage has been elected as Prime Minister, and in which it is now mandatory to keep a copy of files whose names contain the letters UK in a separate folder.

Create a package called Housekeeping, and within this a string variable called FilePath to hold the name/path of each file that you find:

Make sure you put something for the variable value.

Loop over all of the files on your USB stick, finding the ones whose names contain the letters UK and copying them to your new Copied files folder: 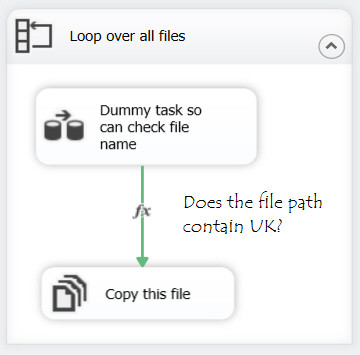 The comment shown here is an annotation, to explain what the expression constraint is doing.  The package should loop over all of the files on your USB stick, checking to see if each contains the letters UK (see expression below) and copying it to your new folder if it does.

Here's what you could put for the expression constraint:

When you've got this working, delete the folder and close down your package.