How to create autoshapes, lines and connectors in VBA macros
Part three of an eight-part series of blogs

You can use Visual Basic within Excel, PowerPoint or Word to draw shapes, format them and even assign macros to run - this long blog gives lots of ideas of how to proceed!

This is one small part of our free online Excel VBA tutorial.  To find out how to learn in a more structured way, have a look at our training courses in VBA.

Naming, referring to and positioning shapes

Once you've added a shape, you'll want to be able to refer to it in the future - and you'll also need to know how to position it exactly where you want on the screen.

Adding a shape without getting a reference to it

Consider the following block of code, which adds a square to the current worksheet:

The problem with this method is that there's no easy way to refer to the shape after adding it.  If it's the only shape added to date, this would work:

However, referring to a shape by its index number within the collection of shapes clearly isn't a reliable method.

A much better way to add a shape is by setting an object variable to refer to it immediately after adding it:

'give this shape a unique name

Note that (as always in VBA) if you're capturing a reference to something,
you need to include brackets round the argument list.  The advantage of the above approach is that you can now refer to the shape that's been added either by the object variable used:

'can then refer to this by variable now ...

Or by its name:

Shape names are a bit strange in VBA, and are not necessarily unique.  Rather than trying to understand the rules, the simplest thing is to generate and assign unique names yourself for shapes that you've created programmatically. 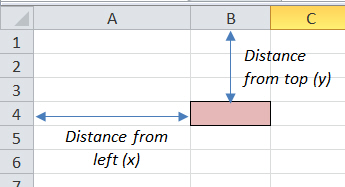 To position a shape in the shaded cell, we just need to know the two distances shown.

For example, supposing that we want to add a shape within the cell like this: 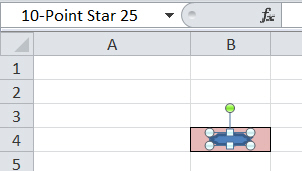 The shape is half the width of the cell, and half its height.

Here's some sample code to do this:

This code will position the shape relative to the top left corner of the cell, rather than of the worksheet.

One thing to watch is that the units for column widths/row heights aren't the same as for shapes!

Now that we know how to refer to our shapes (and how to position them where we want on screen), it's time to make them look pretty!

I've used the sq.Name = WOL_0001 in my script and it works great for referencing the objects in the code. Once the macro completes is there a command to clear the assigned names from the objects on the sheet so that they can be used again for the next iteration?

My specific code is grouping the objects with user-defined info to be used in a visual layout.  When the code is run on the next set of information it works fine until it goes to group the objects; at this point it errors because it's selecting all the already named objects from the first pass, and these are already grouped, causing of the error. The underlying issue is the code is selecting the wrong objects after the first pass. Once they are grouped I have no need for the assigned name reference anymore and need to start the code over.