You can create key performance indicators (KPIs) within Analysis Services Tabular, but there a couple of foibles that you need to be aware of, as shown by this blog.

Instead of aiming to hit another measure, you can set a numerical target or an absolute KPI.  This is most useful when you want a ratio to be as large (or small) as possible.

We'll solve the relative KPI problem shown in the previous part of this blog by targeting the percentage ratio between this period's sales and sales for the same period last year:

That is, divide this period's sales by the total quantity for the same period in the previous year (if this generates a divide by zero error because there is no previous year, show a blank instead).

Having created the measure above, you can then turn it into a KPI:

Right-click on the measure and choose to create a KPI.

Complete the dialog box which appears as below by following the numbered steps: 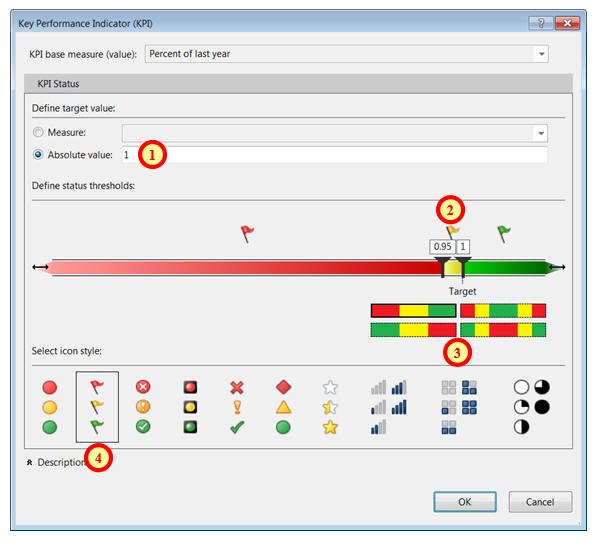 The numbered steps are explained in more detail below.

You can now create a pivot table based upon this model in the same way as for a relative KPI (see the previous part of this blog), with one exception:

There's no point (as here) choosing to show the Goal, because it will always be the same!

If you display the goal as above, this column will lack variety:

The goal is the same for every single row!

And with that you've come to the end of this blog on creating KPIs within SSAS Tabular.