Create a package called Simon Says, which will count how many series have been made so far and then offer suitable advice to Simon Cowell on whether to make another.  Within this new package, create a couple of variables:

We've tentatively set the maximum permissible number of series to 10. Some may think one was too many ...

Create a data flow task, and set the source to be the Series worksheet in the workbook in the folder above: 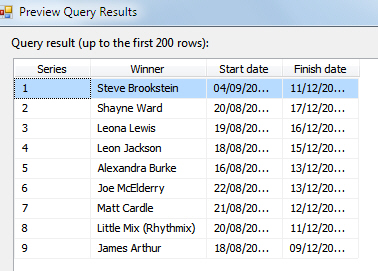 What you should see when you preview the results in the Excel source.

Now add a Row Count transform on so that the data flow task looks like this: 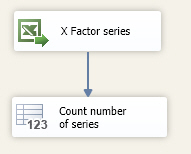 Store the number of rows in your NumberSeriesMade variable.

Create 3 script tasks as follows to control what happens next: 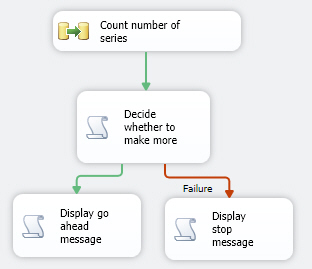 The first task should end in success or failure, depending on whether we've exceeded the maximum number of permissible series yet.  The other two tasks should display suitable messages in either case.

Try running the package with the MaximumNumber variable set to 10 and then 7 (say).  You should see messages something like this:

Again, note that this is NOT the quickest way to solve this problem!

Close your package down.