Create a new package called Dinosaur recount.  As the package name suggests, we're going to count the number of dinosaurs, so first create a variable called DinoCount to hold this information:

The variable to hold the number of dinosaurs.

Now create a data flow task for the package: 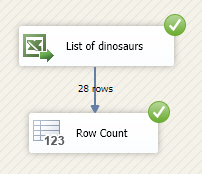 The data flow task will pipe the dinosaurs imported into a row count transformation, which should store the count of rows imported in the DinoCount variable.

Add a script control flow task which displays the number of dinosaurs found:

Don't forget to assign the DinoCount variable to the script task as a ReadOnly variable, so that you can access its value in code.

Close the package down!