Visual C# | LINQ to SQL exercise | List out the films which made a loss, using LINQ to SQL

If you haven't already done so, run the script in the above folder in SQL Server Management Studio to generate the Movies database.

Add a LINQ to SQL Classes item to your project, and drag the tblFilm and tblStudio tables onto the Object/Relational designer: 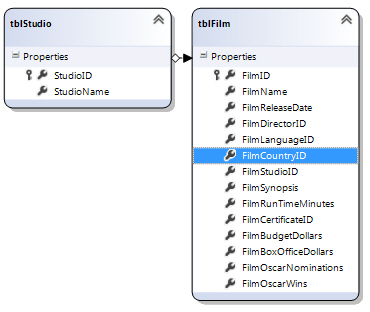 The tables as they initially appear.

We're not really interested in much of this, so rename entities and properties (ie tables and columns) and delete properties to get a simpler model:

The revised model, with far fewer properties, and with simpler names.

Now create a form called frmFilmStudios.  Within this, write LINQ to SQL code to show a message of all of the films whose box-office takings were less than a third of their budget, together with each film's studio: 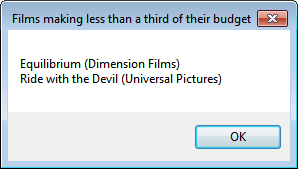 There are only 2 films in this unhappy position in the Wise Owl database.

Probably the easiest way to do this is to project the results of the query expression into an anonymous type, containing a FilmName and StudioName property.

When you've finished, close down any windows that you have open.