Commenting code is an art form! This series of blogs explains why, how and when to comment in VBA.

This blog is part of our Excel macros online tutorial series.  Alternatively, come on one of our VBA classroom training courses.

This online training blog shows how to add comments to VBA (Visual Basic for Applications) code.  The ideas shown work in Access, Word, PowerPoint and all other MS Office applications, but the diagrams come from Excel Visual Basic.

An example of commented code in Visual Basic for Excel

Any comment in VBA begins with a single apostrophe character (').  When you type in a comment and press the Enter key, the line will go green.  For comments spanning multiple lines, you'll need to type the ' key multiple times:

Note that there is one other way to get multiline comments, and that's to use an _ underscore continuation character after all but the first lines:

It seems easier to this owl just to use repeated apostrophes!

Note that comments don't have to start at the beginning of lines:

Changing the Colour of Comments

If you don't like the colour green - change it!  The first thing to do is to go into the VBA editor's options: 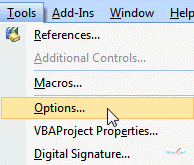 First, go into the VBA code editor's options dialog box as shown on the left.

Now choose to change the colour for your comments as follows: 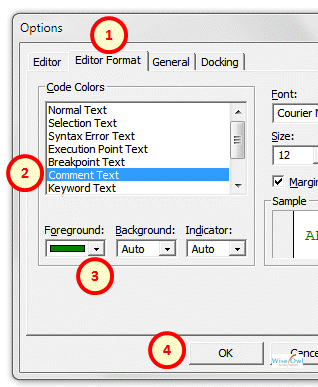 You can also comment out code, as described in the next blog in this series.