If you're wondering whether to upgrade to Integration Services 2012, or just want to know what differences there are between SSIS 2008 R2 and 2012, this blog should help you!

In addition to all of the differences listed so far, here are some other improvements in SSIS 2012.

There is a new task to manage Change Data Capture: 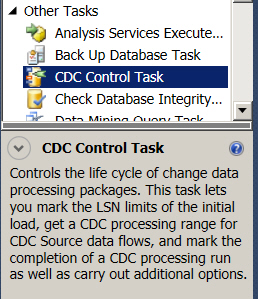 I must admit I haven't yet had cause to use this, but doubtless it will change someone's life ...

Another fairly specialised feature allows you to tap data (think of it as like a data view whose output is preserved):

This property of a connection between two data flow tasks is key to getting data taps to work.

Data taps are another feature I haven't yet made us of, but there's a pretty good run-through here.