Thoughts on working with SSIS 2008 and SSIS 2012
Some thoughts and advice to those who have to shuffle between versions 2012 and 2008 of Integration Services.

Following a recent course, I thought I'd share answers to some questions with the wider world!

Alas, I think not.  If you're in 2008 R2, you can import packages as follows.  First choose to add an existing package: 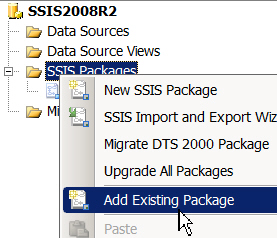 First choose to add a package to a project.

Choose where it's coming from:

Choose to get the package from your computer's hard disk.

You can now choose a package file:

Click on the button shown to find and choose the package you want to import.

So far, so good, but now's when it all goes pear-shaped (a strange saying to describe things going wrong, as pears are reasonably well-formed ...):

Part of the error message which appears.

After some Googling, it appears that not many people want to move packages from a later version of SSIS to an older one, but I did find this Microsoft site which suggests it's not possible: 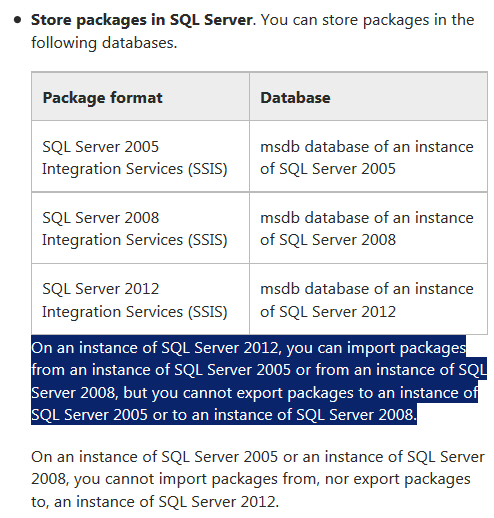 Although this is talking about packages stored in SQL Server, I assume the same thing applies to all packages - it looks like exporting is not downwardly compatible.

This StackOverflow article also suggests that it can't be done.

No - the concept doesn't exist.

What a parameter allows you to do is to pass information to a package at the time that you run it.  In older versions of SSIS (ie before 2012) the only way to do this is by setting the value of package variables in a configuration file.

There are two main approaches to deploying an SSIS package - project deployment and package deployment: 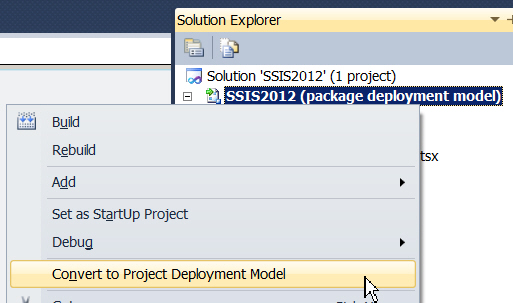 Here is a quick comparison of the two methods:

Finally, if anyone reading this is wondering whether they should upgrade, the answer is emphatically yes!  If not for any of the above reasons, then because the user interface is so much nicer in 2012:

Which would you rather see on your screen?