Triggers are special stored procedures that execute automatically in response to certain events in a database. This blog explains how to create three types of trigger in SQL Server: DML, DDL and Logon triggers.

This blog is part of our free SQL Server tutorial.

DML, or Data Manipulation Language triggers are used to execute code when the data in your database is modified, i.e. when an INSERT, UPDATE or DELETE statement is executed on a table or a view.

Why use DML Triggers?

In many respects DML triggers are similar to constraints and you can use them in a similar way to enforce business rules and data integrity. The main benefits of using a DML trigger rather than a constraint are shown in the table below:

There are two types of DML trigger: AFTER and INSTEAD OF.  The names of these triggers are fairly indicative of when they run!  An AFTER trigger will be executed immediately after the event which triggered it has run successfully.  An INSTEAD OF trigger replaces the event which originally called the trigger.

Creating a DML Trigger in the Object Explorer

You can add a DML trigger to a table or a view in the Object Explorer window.  To do this, expand the table or view and then right-click the Triggers folder. 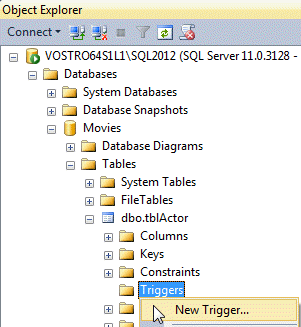 When you select the option shown above SQL Server will create a new query window full of system-generated code which you can then modify to create your trigger.

Manipulating the system-generated code can be tricky!

As with many examples of system-generated code it is often easier to write your own code from scratch.

You can write code to create a trigger in any query window, as long as the statement which creates the trigger is the first one in a batch.

The basic syntax for an AFTER trigger is shown in the example below:

--the instructions for the trigger go here

The basic syntax for an INSTEAD OF trigger is very similar to that for an AFTER trigger:

--the instructions for the trigger go here

Again, you can write your trigger to handle all three data modification events or any single event or pair of events.  The main difference is that you can only have one INSTEAD OF trigger for each event.

An Example of a Simple AFTER Trigger

The example below prints a message whenever an actor is added to, deleted from or modified in the tblActor table:

PRINT 'Something happened to tblActor'

After executing the code to create this trigger, any modifications to the data in the table of actors will cause a message to be printed.  The example below inserts a new record, modifies it and, finally, deletes it:

--Add a new record into tblActor

--Modify the record that was added

When the code above is executed we see the following output in the Messages window:

We see the message once for each action performed on the actor table.

An Example of a Simple INSTEAD OF Trigger

When you create an INSTEAD OF trigger, the instructions you provide are executed in place of the event which causes the trigger to be fired.  The code shown below creates a trigger which generates an error message whenever someone attempts to insert a new record into the table of actors:

Once the trigger has been created, any attempt to insert a new record into the table of actors will fail and the error message will be displayed:

The result of trying to insert a record into the table of actors.

You can remove a trigger from a table or view in the Object Explorer window: 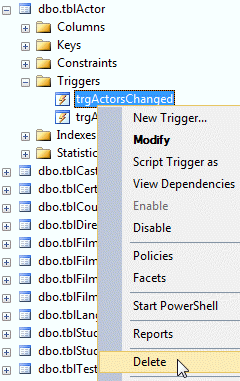 Expand the Triggers folder for the table or view and right-click on the trigger you want to remove. Click Delete to remove the trigger.

Click OK on the dialog box which appears to delete the trigger.

You can also delete a trigger in code, as shown below:

Disabling and Enabling a Trigger

Rather than deleting a trigger you may just want to disable it and re-enable it later.  You can do this in the Object Explorer, as shown below:

You can also disable and enable a trigger using code, as shown in the example below:

You can change the way a trigger works either by using the Object Explorer or by writing some code. 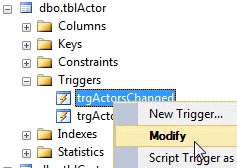 Expand the table or view and open the Triggers folder. Right-click on the trigger you want to change and choose Modify.

Choosing the option above will create some system-generated code which you can then edit to change the way your trigger works.

You can edit the code and then execute it to modify the trigger.

You could, of course, just have written the code out from scratch.

If you have created multiple AFTER triggers on the same table you can set which one will run first and which will run last.  To do this you can use a system stored procedure called sp_settriggerorder, as shown below:

--Set this trigger to be the first one executed

--Set this trigger to be the last one executed

The stored procedure has three parameters which are explained in the table below:

If you want to remove a specific order from a trigger you can use the same stored procedure, setting the @order parameter to 'none'.

The Inserted and Deleted Tables

Often it's useful to have access to the data that has been modified when you're creating a trigger and, for this reason, SQL Server provides you with the inserted and deleted tables.  These tables are generated automatically in memory whenever data is modified in a table or view and you can access their rows in your trigger code.

The table below describes how these tables are used in different DML trigger events.

The simple trigger shown below will select any records that have been added into the actor table whenever an insert event occurs:

When the trigger has been created, any time a record is added to the table of actors its details will be shown in the Results pane.

The details of the inserted row appear in the Results pane.

Using the Inserted Table for Validation

One advantage of using a trigger instead of a constraint is that a trigger can refer to columns in other tables.  In this example we'll create an AFTER trigger which fires whenever a new record is inserted into the table of cast members.  The trigger will check the actor table to ensure that the actor we are trying to assign to the role is still alive (it's a morbid example I admit, but hopefully it demonstrates how you could use triggers to test business logic).

JOIN inserted AS i

RAISERROR('That actor is no longer alive',16,1)

Whenever a record is inserted into the cast table the trigger checks to see if there is a record in the actor table with the corresponding ActorID whose ActorDateOfDeath field is not null.  If there is a record which matches these criteria an error message is raised and the transaction is rolled back.  The result of attempting to insert a deceased actor into the cast table is shown in the diagram below:

The end result is that we can't assign a deceased actor to a new role.

Now that we have a good overview of how DML triggers work it's time to investigate DDL triggers.

I'm currently learning SQL and I am having a small problem. I am using Microsoft SQL Management Studio, and have two tables. One table is dynamically updated every couple of hours from PLC data using an ODBC connection that is established. I would like to create a trigger so that when I receive certain numeric values among data from PLC in this dynamic table, that value is multiplied by a certain number (constant) and written as a result into second table. Can you help me out with this?

The idea as I understand it it to listen to rows being inserted into the first table, and when the score is more than a pre-set number (I've used 30) insert this score into the second table, multiplied by a given number (I've used 10).  To do this, you need to create a trigger:

CREATE TRIGGER trgAddAdjustedScore
ON tblFirst
AFTER INSERT
AS
BEGIN
-- insert into the second table records from
-- the first, but only when the score is more than 30
INSERT INTO    tblSecond(
Name,
AdjustedScore
)
SELECT
i.Name,
i.Score * 10
FROM
inserted AS i
WHERE
i.Score > 30
END

The key to understanding this is to realise that when you create a trigger on a table using the keywords AFTER INSERT, a table called inserted will automatically be created for you, containing the rows which have just been inserted.  So what this trigger does it to select all of the rows from the first table where the score exceeds 30, and insert them into the second table (multiplying the score by 10).

You could test this out by inserting some rows:

You should see that the second table now contains one row (Sue), with score set to 400.