How error messages work in SQL (including TRY, CATCH, RAISERROR and THROW)
Part two of a four-part series of blogs

You can use BEGIN TRY to trap errors from SQL Server 2005 onwards, and also raise your own errors using RAISERROR or THROW - this blog explains all!

If you want to learn more about SQL in a classroom setting, you could consider attending a Wise Owl course; otherwise, see the rest of this comprehensive SQL tutorial.

The parts of an error

There are 6 standard error functions in SQL - each is described in more detail below.

The Error Functions in SQL

The table below uses the following error message as an example:

This page uses this error message as its example.

Here's the 6 bits of information displayed for any error such as this:

You could use these to trap the above error and show it in a glossier form.  For example, suppose you ran the following query:

-- a stored procedure which will fail

This would produce the following output:

You can see the various bits of information about the error more clearly here.

If you want to see what error messages are installed with SQL Server, run the following script:

Here are the first few error messages for 2008 R2:

Where a % sign appears it means that a message's text can vary (as explained in the final part of this blog).

Error message enthusiasts might like to use the system stored procedure sp_AddMessage to add their own messages to those stored in the Sys.Messages table.

On my instance of SQL Server the highest-numbered error is 49,902.  When you create your own errors, they are automatically flagged as number 50,000 by default:

Here the web has gone down, so we raise an error to reflect this. Because we haven't given an error number, 50000 is assumed.

There's more detail on raising your own error messages at the end of this blog series, including using the new THROW command.

The severity number goes from 0 to 25.  Here's what the numbers mean:

There's not a great deal to say about this.  It's provided as a way of distinguishing between two messages with identical number.  To all intents and purposes it always takes the value 1, and is of no interest.  If you want to prove this to yourself, have a look at Microsoft's take on the subject.

This gives the name of the procedure or trigger in which the error occurred, where there is one (otherwise, it returns Null).  What follows is an example to illustrate where this might be useful.

First create a stored procedure which takes an integer parameter, then tries to divide it by 0:

Now write a main procedure which calls this subprocedure, passing the number 1 to it:

-- try to execute the subprocedure

When you run this main procedure, it will crash.  Here's what the error-trapping will show:

The error occurred in the spSub procedure, but is reported from spMain.

What this shows is that if an error isn't captured in a called procedure, it will bubble up to the one which called it.

You can display line numbers for SQL in SQL Server by selecting Tools --> Options, then ticking the box shown here: 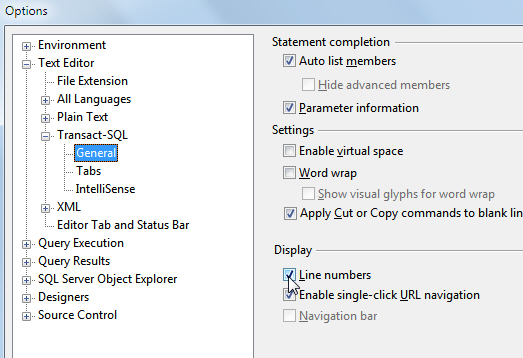 Tick the Line numbers box in the Transact-SQL General tab.

You can then use SQL line numbers to see where an error occurred: 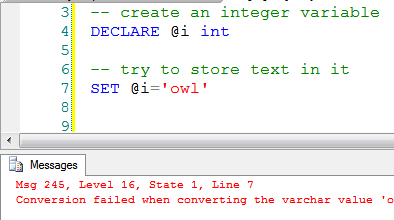 As mentioned earlier, however, by far the easiest way to find an error is just to double-click on the offending line!

The text of error messages is the most useful part of an error, but there's not much more to say about it here!

Now that we've covered the parts of an error message, let's have a look at a practical example showing the use of error-handling in SQL.