Changing the Scope of a Variable in SSIS 2012

Another small blog on something which just caught me out.  Virtually everything on the Internet says that you can create a variable scoped to a particular task as follows:

The only problem is: it's changed in Integration Services 2012!

This blog assumes that you know what variables are about - it's just to solve a specific problem.

You can add a new variable in SSIS 2012 using the Variables window:

You can then choose to move the variable (an odd term):

Click on this icon to change the scope of the selected variable.

Select the task which should contain the variable: 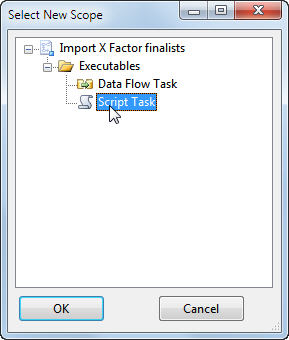 Yeah - the scope has changed!

The scope is now restricted to a specific task.

Don't forget you may need to select the task to see the variables it contains, since by default you only see those with package scope.