Many programming languages feature a variety of types of loop which allow your programs to repeat a set of instructions multiple times. In SQL there is only one type of loop, and this blog explains how it works!

This blog is part of a complete SQL tutorial.  We also run classroom-based SQL training courses.

Running SQL Queries in a Loop

This part of the series will show you how to use a loop to execute a query multiple times, using a different value in the WHERE clause of the query each time.

To demonstrate this technique we're going to list the number of films which have won different numbers of Oscars.  The output we're aiming for is shown in the diagram below:

Each time the query is executed it generates a new line in the output.

Declaring and Initialising the Variables

For this example we'll use three variables, as shown below.  If you need a reminder of how variables work have a read of this blog first.

Once the variables have been declared we can set the values for two of them like so:

Our loop counter will begin at 0 and the highest number of Oscars won by a single film can be found with the simple query shown above.

The next step is to lay out the structure of the loop itself.  Here's the code to do just that:

This loop will continue to run as long as the value of the loop counter is less than the value stored in the @MaxOscars variable.  We've made sure to include the line which increments the counter as well.

Running a Query Inside the Loop

With the structure of the procedure defined, we can now add the code which will be executed each time we go through the loop.  Firstly, we want to count how many films have won the specified number of Oscars.  We can do that using the COUNT function and storing the result in our @NumFilms variable.  Here's how that might look within the loop:

Each time we calculate the number of films winning the specified number of Oscars we need to display the result somewhere.  We can do this using the PRINT statement combined with a concatenated message, like so:

Now that we've added all of the code we can execute the procedure to return the output shown at the top of the page.

Was it Worth it?

For such a simple example, almost certainly not!  We could have achieved almost the same results using a single SELECT statement with a GROUP BY clause.

The output of the query is shown below: 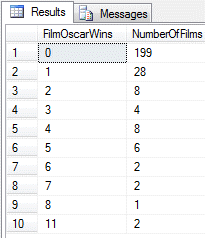 It's not quite as nicely presented, but it's basically the same set of results.

If you can achieve the same results using either a set-based operation or a loop, the set-based method will almost certainly be quicker (our live two-day online advanced SQL course explains the set-based alternatives possible).  There will be times, however, when a loop is pretty much the only way to get the job done.  This is particularly true when you're working with cursors.

Cursors are described in detail in another blog.  For the final part of this series we're going to show you how to break out of a loop prematurely, and what to do if you ever get stuck in a dreaded endless loop!