PowerPivot is a superb addition to Excel: it allows you to create pivot tables based on multiple tables taken from a variety of data sources, and its DAX language lets you report any statistic you want. This overview summarises how to get started with PowerPivot, and what it does.

If you try to create a pivot table now, this is what you'll see:

A user of your pivot table might find this confusing.  There are some fields that they won't be interested in, they'll be confused by the fact that there are two tables, and the fields need better names.  We've also no way of grouping films by their decade of release.  Time to solve these problems!

The process of taking a techie set of tables and columns and simplifying it to make it usable is called "building a data model".

A user won't want to see two tables, so we'll hide the directors one: 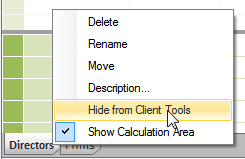 You can right-click on any table to hide it from client tools (this means it won't show up in Excel pivot tables).

Likewise, a user won't want to see each director's id number or their release date, so we'll hide those: 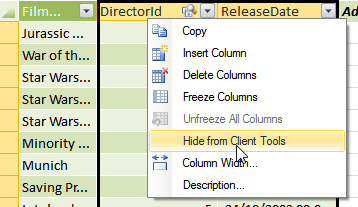 Right-click on any columns to hide them from client tools.

When writing a formula, click on a column to include it (like using a cell reference in Excel).

The full formula should be as follows: 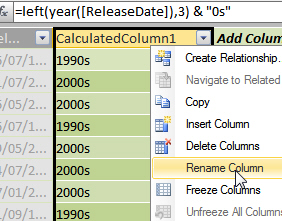 After typing in the formula, the values will appear for each row. You can then rename your column (from CalculatedColumn1 as here to Decade, perhaps).

To get the director's name, we'll use the RELATED function: 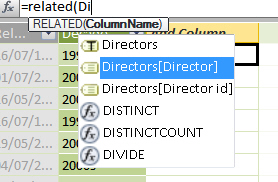 Click at the top of a new column and start to create a formula as shown. You can pull in a column from any table related to the films one, whether directly or indirectly.

Here's the column when it's created:

The RELATED function is like a VLOOKUP function, but easier to write.

If you now return to Excel, you'll see the final data model for our pivot table:

After refreshing, you should see these columns. Much easier to use!

Now that we've imported our data and created a data model, it's time to create a pivot table.