The Disadvantages of Views

I've looked at why views are a good thing; what are the pitfalls?

Even if you put an ORDER BY clause in a view, it won't order the data correctly unless you also specify how many rows you want to display.

When i first heard this, I found this almost impossible to believe.  If views don't sort correctly, what do they do?  But it's true: if you're returning data from a view to your application, don't assume that it will be sorted as you requested unless you used TOP 100 PERCENT.  And even then, as you'll see below, ordering isn't guaranteed.

Sometimes you get a warning about this problem.  For example, supposing you try to create a view with ordering, but no TOP keyword:

If you run this SQL, you get the following error:

The ORDER BY clause is invalid in views, inline functions, derived tables, subqueries, and common table expressions, unless TOP or FOR XML is also specified.

The solution is to add TOP 100 PERCENT to your view, but even this doesn't guarantee that the rows are returned sorted.  For example, the following query creates a sorted view then returns all of the rows from it:

Here are the first few rows returned by this SQL:

Despite the ordering clause, the films still don't appear in name order!

The safest thing to do is to either apply sorting to data in your final application, or to use stored procedures.

I've had this happen many times to me in the past, but can't reproduce it at the moment.  Sometimes you want to add columns to a table: 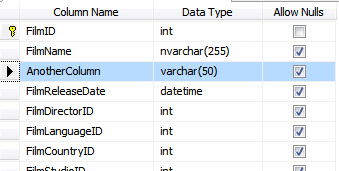 Here we've added a new column to our table.

You would think that this couldn't possibly have any effect on existing views, but sometimes it does:

In a view depending on this table, all of the aliases can be shuffled down one row, making the entire view unusable until you correct it.

You have been warned!

I've mentioned this already, but it's worth repeating because it can be so annoying.  Imagine that you've spent ages indenting, commenting and spacing out your view script:

You then accidentally right click on the view and go into design view, save your changes … and you've lost all of the formatting above and are back to this:

FROM dbo.tblFilm AS f INNER JOIN

ORDER BY 'Name of studio' DESC, 'Name of film' DESC

Disadvantage 4 - views can only select data

All a view can do is to select data.  For example, you can't use a view to:

For all of these - and for any SQL programming beyond simple SELECT statements - it might be time to learn stored procedures.