The Pros of using Views in SQL Server

Should you use views (in particular, as opposed to writing the more powerful stored procedures)?  This page will concentrate on the good side of views - we'll consider the disadvantages in the next part of this blog.

If the above sounds like a recommendation to avoid using views, it's anything but - the first advantage trumps all of the disadvantages.

Advantage 1 - you can base views, reports and stored procedures on views

You can base queries on views as well as on tables: 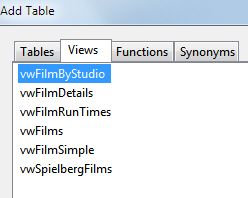 Whether you're writing views in SSMS or creating reports in SSRS, you can always use a view in place of a table.

Suppose that you spend your life working with movies data (perhaps you work for a film company), and you frequently want to work with a subset of the complete dataset (perhaps just the films made by Steven Spielberg).  Almost every query that you create will probably:

To avoid having to keep creating the same SQL, you could create a view, and base all subsequent queries on this view.  Here's what the view would look like:

Apologies for using the * to include all columns from the films table - you might want to be pickier than this, and specify exactly which columns the view should list.

Here's what a query to analyse Spielberg film Oscars would look like:

Here's what this would return:

I don't know how many times I've stressed to people on our SQL courses the importance of creating views as above to avoid reinventing wheels for every query that you create.

One thing to stress: the query above will also rerun the vwSpielbergFilms view to get the latest version of the data.  If speed is a big issue for you, you'll probably want to consider creating temporary tables of data instead.

Here's some of the things stored procedures can do:

Your IT department may be deeply reluctant to give you permission to create stored procedures, but they may give you the right to create views (since these can only ever select data).