Outstanding course feedback
Average score 9.32 out of 10, based on 9294 reviews
If you found this blog useful and you’d like to say thanks you can click here to make a contribution. Thanks for looking at our blogs!

Excel is a great product, but there is always room for improvement. Here Andy Brown considers 12 possible new features for Excel 2020.

I listed 6 suggestions for Excel 2020 in the previous part of this blog; here are 6 more!

I don't think Microsoft can get rid of any Excel functions (imagine the outcry if the VLOOKUP function wasn't supported any more), but they could introduce new ones.  Here are some suggestions.

I admit I've not thought about rewriting functions in much more detail than this because I think it's so unlikely to happen, but there's also scope to separate the INDEX and OFFSET functions into two separate ones, according to whether they're being used as single value functions or array functions. 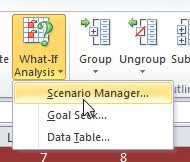 The scenario manager and data table menu in Excel.

Scenarios are a great idea spoilt by a ridiculous limitation:

The message you'll see if you try to create a scenario affecting more than 32 cells.

What Excel needs is the ability to designate a cell as belonging to one or more scenarios, and then the ability to be able to save multiple data files of different sensitivity analyses containing all affected cells.  Just an idea!

Is it time for a 4th dimension?  Or perhaps even for multiple dimensions?  In the same way that a pivot table can have one or more page fields (or report filters, as they're now called), so you could choose to enter or work with data for different products, groups, regions or branches.

To some extent PowerPivot for Excel provides this feature, but only as an add-in.

There are a number of third-party add-ins which allow you to see where you've used formulae inconsistently (here's an example).

The F shows a unique formula, the arrow where it has been copied across.

Is it time to build this functionality into Excel?

There are a few dialog boxes in Excel which are - quite obviously - containers for all of the things Microsoft couldn't work out what to do with.  Here's the worst offender: 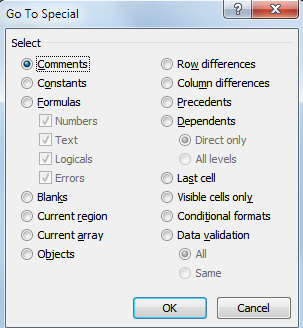 I challenge anyone but an Excel guru to be familiar with all of these options!

The Paste Special dialog box has many options which are nothing to do with pasting: 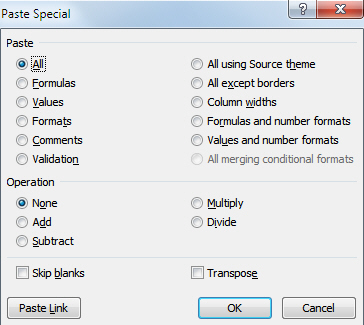 Another dialog box needing a rewrite.

If these dialog boxes were houses, they'd have been condemned and pulled down long ago.  Do the merciful thing!

This is a slightly unfair one, because Microsoft would love everyone to stop writing VBA and start writing code in Visual Studio using VSTO instead.  However, they could still improve the VBA coding interface in two simple ways.

Firstly, you should be able to define a variable and assign a value to it in one go:

The above code would work in VB.NET; why not VBA?

Secondly, code should be indented automatically as you type it in, like this:

MsgBox "The cell is big"

MsgBox "The cell is small"

Instead, VBA will let you get away with this:

If you don't see what I mean about this change, try writing VB within Visual Studio for a few days, and then go back to VBA.

If you have any suggestions for new features for Excel, please let me know via a comment on this page!

If you create an Enum, it would be good if the VB editor automatically added End Enum for you.

Similarly for If and End If, Select Case and End Select, With and End With, For and Next.

It would indeed!  As happens in C# and VB in Visual Studio, and most other development environments.