November 2021 competition: a logic puzzle
Five space entrepreneurs have missions to different planets scheduled for consecutive years - given the few clues, see if you can work out who is going where, and when!

Five entrepreneurs are planning missions to the solar system with the companies they've set up, to set off in consecutive years (the planets are listed in order of distance from the sun - or just remember that My Very Educated Mother Just Served Us Noodles).

Given the information below, see if you can work out who is going where, and when:

You may find this grid useful: 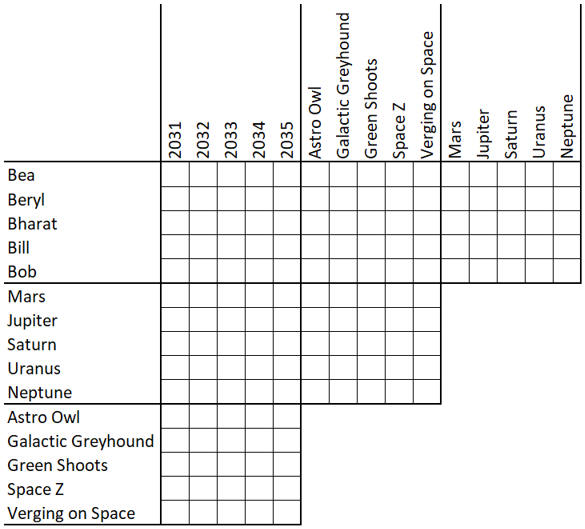 Alternatively, this Excel workbook contains the above grid and also some useful macros to help you fill it in (based on this original template).

To enter the competition, just let us know who will travel to Jupiter, when, and with which company.  Send your answer by the last week in November to:

The email address to use.

The first correct entry opened by our ERNIE (our Excel Random Number Independent Evaluator) will win a £50 Amazon voucher and a mention in our next newsletter (the publicity from which may allow the winner to launch a successful career as a YouTube influencer or other social media star.  Maybe).