Changes for the October 2021 Power BI Update
There are virtually no changes in this month's update, but this blog does include details of two new features which slipped through previous monthly update nets: persistent filters and personal bookmarks.

From what I can see this month's update only contains one change to the core Power BI Desktop product - the introduction of some DAX bitwise functions:

I can't imagine why you would ever want to use any of these functions in a normal environment, let alone in Power BI.

However, I have recently discovered two changes which were introduced some time in the past year, but which slipped under the Microsoft updates radar:

Waiting in the wings are the Azure map visual (still!), modern tooltips and a paginated report visual, to name but 3: 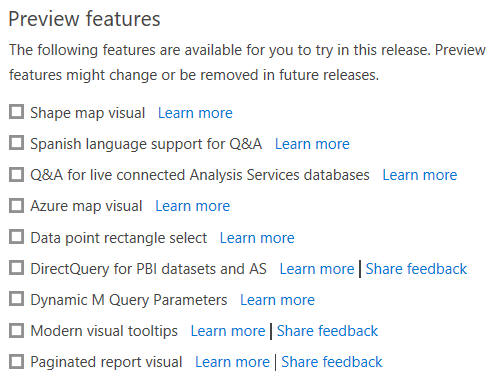 Power BI features in preview after the October 2021 update.

I've just been doing a bit of research, and the shape map visual was first introduced as a Power BI preview feature in January 2018, as this blog proves.  This means it's coming up to its fourth birthday.  Party, anyone?