The April 2021 update to Power BI Desktop makes it easier to load text, CSV, JSON and Excel files and includes a wider range of shapes, with more drawing effects

Occasionally Microsoft introduce a new feature into Power BI which it's hard not to rave about - this is one such feature!

Not all CSV or text files are neatly formatted.  Here is one which definitely isn't:

A messy text file, containing the names, roles and dates of birth of Wise Owl employees.

Normally when you load this you would then have to transform the data yourself:

When you try to load the data, this is what you initially see.

As from this month's update to Power BI, you can now click on the Extract Table Using Examples button shown boxed above to train Power BI in what to import.  Here's what you initially see: 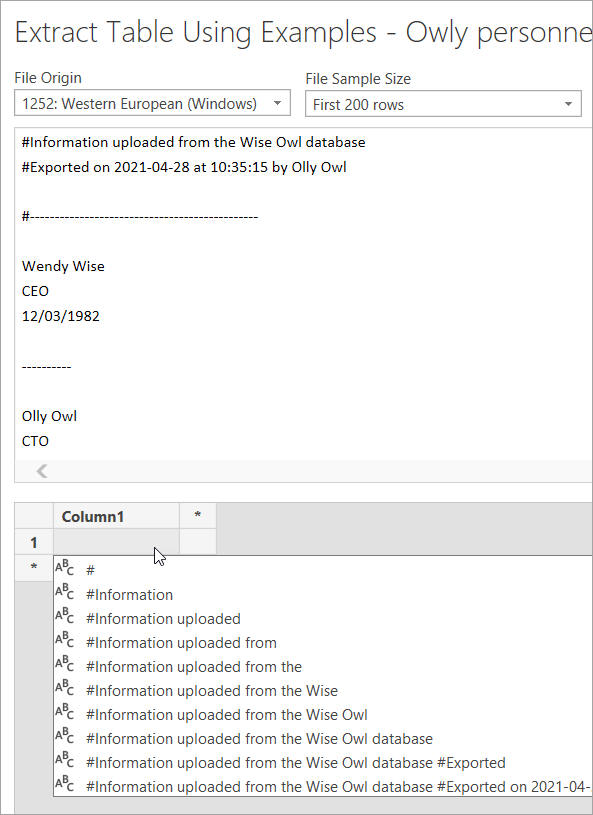 Double-click at the top of the first column to choose what it should display (it's not at all obvious that this is what you should do).

Rename this column, then double-click at the top of the second column and choose the next value:

Now do the third column:

You've told Power BI the three columns it should import now, but crucially it doesn't know where each record ends.

You need now to give Power BI one more bit of information - the start of the next record of data, so that it will know where to break:

Choose the start of the next record.

Once you've done this, Power BI can extrapolate your choices!

The final set of rows.

When you choose to go into Query Editor to see how Power BI has transformed your data, you can see each step:

The steps created - you can click on each one to see its effect.

The main transforms are as follows:

It's all very clever - you can try it yourself with this text file.