SQL Server Reporting Services allows you to write (and use) custom functions written in Visual Basic within a report. This blog considers the pros and cons, and shows how to do this.

Embedding Code in a Report to Show a Film's Status

As promised, we'll create a function which will give us the Oscar status of a film:

Each film can have one of three status descriptions, depending on whether it won or was nominated for Oscars, or neither.

To embed the function to show a film's Oscar status within a report, you first need to write it!  Here's a suggestion:

'determine whether an Oscar winner, nominee or neither

This function will take two arguments as follows:

Given these two bits of information, the code uses an IF statement to return the required status (which is of data type String).

All functions that you create must return one - and only one - value, which they should do using a Return statement.

Types of Argument Allowed in VB

Here's a list of the main types of data you can use in a VB function:

There are a lot more types, but if you're just starting out with VB these will do for now.

Embedding the Code in your Report

Now that you know what you want to say, how do you say it?  First show your report's properties in Design view:

You can now type in your code: 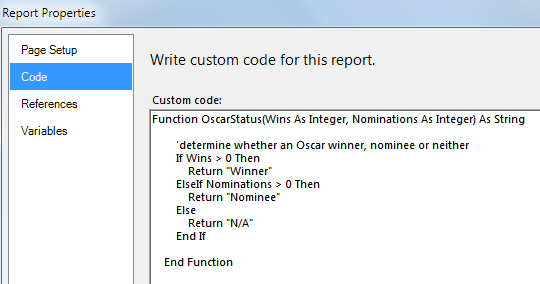 Type your code into the Code tab, as shown here.

If you've written your code in another software application, any formatting will be lost when you save your code in this dialog box.

Once you've embedded code in a report, you can call it within any expression by using the prefix Code.  This is usually best done in SSRS by adding a calculated field to a dataset:

Right-click on any dataset and choose to add a calculated field.

You can now give your new field a name and an expression:

Here we've called the new field OscarStatus, and are about to give it an expression.

Type in the function you want to use, prefixed by code.:

SSRS won't give you any help, and will leave your function name underlined.

Was it worth it?

The above example allows us to create a function which spits out the status of a film given two parameters, but you can do this in at least 3 other ways, all of which are probably better!

Alternatively, you could have used a SWITCH expression in a calculated field in SSRS:

This expression would also return the Oscar status.

This calculated field could be used in any table, matrix, list or chart based on this dataset.

Finally, you could create the function in a separate class using either VB or C# and reference it as a custom assembly (something I'll blog about soon):

This would allow you to use indentation, comments, Intellisense and - if you were that way inclined - C# as above, and would be appropriate for more complicated functions.

For simple functions like the one on this page, it's hard to see how embedded code is worth it (an SSRS or SQL expression would be a better idea).

Given the hint above, let's look at a more complicated example!