The answer to (and winner of) our December 2020 newsletter competition
This month's competition was one by Rory O'Connor of Freemans Grattan Holdings. This blog gives the answer, and also the logical steps to reach it.

Congratulations to Rory O'Connor of Freemans Grattan Holdings for winning this month's competition!  A £50 Amazon voucher is on the way to him.

Rory's was actually the third answer pulled out of our electronic sorting hat; the first two (sorry Ruth and Suzanne) had slight mistakes.  Sorry! 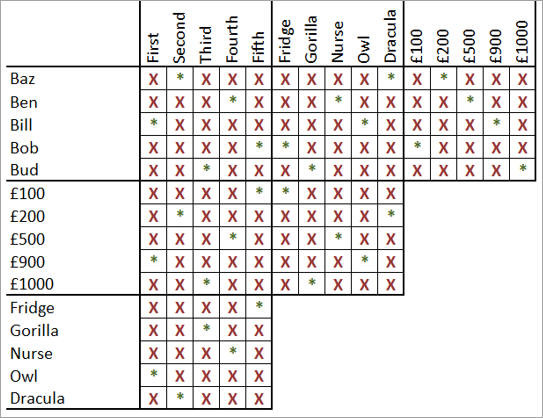 One view of the answer.

Here's another view of the same thing:

A clearer way to show who won what, and how.

I thought this month that I would explain how to arrive at the answer.  Here are the snippets of information: 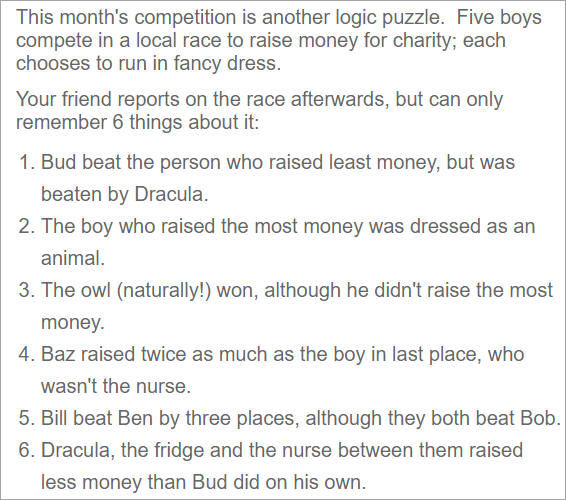 The only information you are given.

An important implication of question 1 is that Bud isn't Dracula.

Snippet 2 says that the boy who raised the most money was dressed as an animal:

Snippet 3 says that the owl won, but didn't raise most money:

Not only does this tell us that the owl won, but (by elimination) it tells us that the Gorilla won most money.

Snippet 4 says that Baz raised twice as much as the boy in last place, who wasn't the nurse:

Snippet 5 says that Bill beat Ben by three places, although they both beat Bob:

This must mean that Bill won, Ben came fourth and Bob came fifth. Because the Owl came first, Bill must be the Owl.

The final snippet says that Dracula, the fridge and the nurse between them raised less money than Bud did on his own:

What this means is that these three boys raised 100, 200 and 500 pounds (although you don't know which raised which), and that Bud must have raised 900 or 1000 pounds. Most importantly, it means that the Owl raised either 900 or 1000 pounds. Entering this gives a satisfying cascade of ticks to reach the diagram shown above.

Going back over the snippets of information, the fourth one tells us that (since we know now that Baz won £200) the boy in last place won £100:

But snippet 1 tells us that Bud was beaten by Dracula.  Given Bud came 2nd or 3rd, Dracula must have come 2nd, giving us the final grid: