Wise Owl 2019 highlights in numbers
It's been a busy year at the Owlery, and we've taken a look back at some of our highlights.

We might be on the cusp of a new decade, but it's always good to take a moment to look back and celebrate the good things that have happened in the last year. Being the numbers nerd I am, I delved into the data about Wise Owl's activities. Turns out there's quite a bit of which to feel quite proud.

Disclaimer: I have absolutely no input in making any of this good stuff happen. I'm just here to tell the stories!

People who attend Wise Owl courses have the chance to share their experience. This information is used to make the courses better, and testimonials from the last three years are shared online.

During 2019, 91 per cent of feedback forms rated Wise Owl courses at least nine out of ten. Nearly two-thirds (65 per cent) gave Wise Owl's courses 10 out of 10 overall.

The Owls are at the heart of all this business's success. As I got to know the team during 2019, I have been amazed not only at their knowledge and patience, but at their generosity in sharing what they know.

Andrew is behind the vast majority of training videos on the Wise Owl YouTube channel, which means so much to the 140,000 subscribers. They often get in touch to say how much they have learned from the videos and how the channel had helped them in their work and careers.

This is exactly what Wise Owl wants to do, with the company's mission statement: To empower people with confidence, knowledge and skills so they can solve their problems and work more effectively.

Overall, the Owls delivered 391 training days in 2019. They travelled far and wide to run these courses at the London and Manchester training venues or on-site for clients across the UK. Hats off to Sam and Shaun who did most of the travelling and delivered the most courses between them!

Everything points to this happening on an even bigger scale in 2020, given that the team has grown with the addition of Matthew Thirwell just last month. Matthew has been learning the ropes over the last few weeks and he will start to deliver training courses next year.

Last but not least, the cat among the pigeons - or rather two kittens among the owls! Annie and Neo joined the Brown household a couple of weeks ago. Aren't they adorable?! 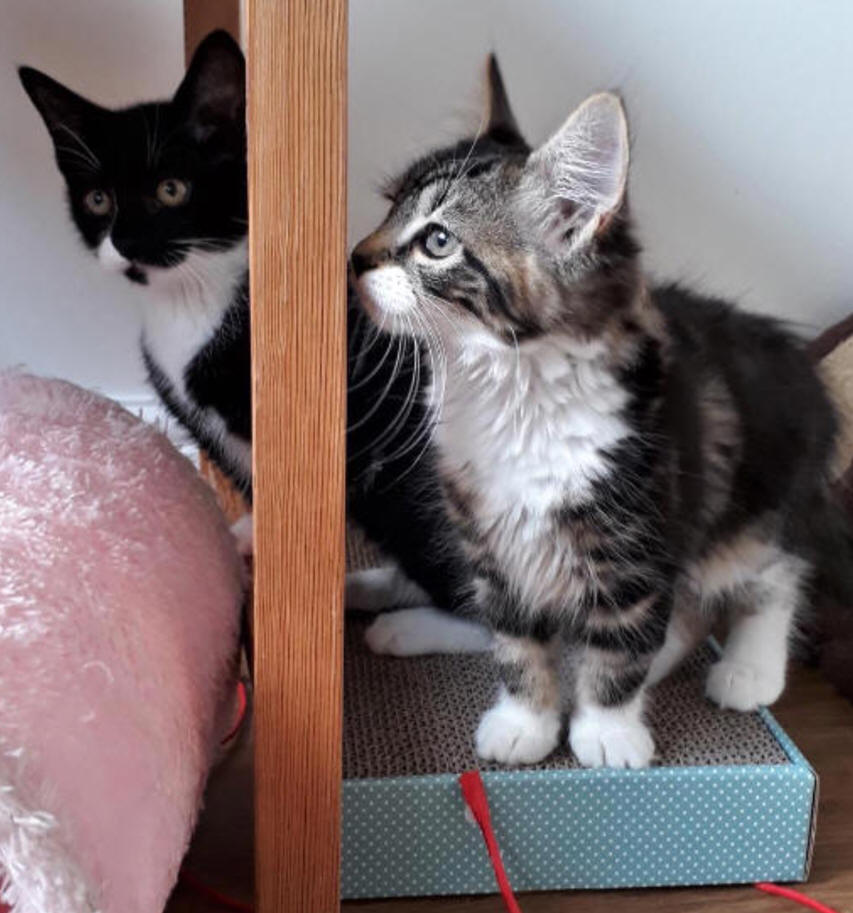 Neo (left) and Annie, the youngest members of the Wise Owl team.

I've already mentioned the very impressive Wise Owl YouTube channel. This was recognised formally this year when they received the YouTube Silver Creators Award in recognition of passing the 100,000 subscribers milestone.

Even though the number was reached in March 2018, it still felt great to receive the award a few weeks ago.

The eyes are now set on the 150,000 marker, which could realistically be reached by the summer (given that this year there were 18,520 subscribers and we need about half of that to get to the new target).

It is tempting to focus on growing the audience size, but it's important to remember the main reason the Owls create content is to help individuals. And it looks like the numbers confirm the content is hitting the mark. There are over 300 videos on the channel, which have been viewed over 293,000 hours this year. That's over 800 hours worth of Microsoft training videos watched just on the YouTube channel.

It's not just video content that Wise Owl provides either. The blog is full of good stuff: from the latest monthly updates to Power BI and predictions about the future of Excel, to Sam's favourite board games and what Wise Owl was like back in the early 90s.

This year Wise Owl also revived their newsletter, now hitting inboxes with the latest updates and info once a month.

Our year in numbers.

As always when it comes to numbers, all sorts of interesting things can be uncovered. So in the spirit of the season, look what we found!

Of course all the people who book Wise Owl courses are wise men and women. But since records began, we can only find evidence of 8 people named Joseph and 11 Marys who booked our courses. No Jesus in sight, nor an angelic Gabriel (there was one Gabriella though!).

Davids are more likely to book tailored courses, and Pauls to book scheduled courses. Although if you combine Daves and Davids, they win this category too. 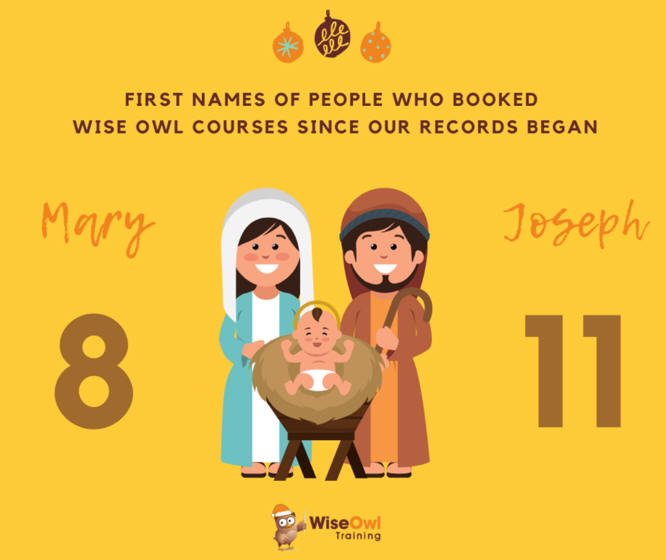 Maybe Jesus will book onto a Wise Owl course next year?

Just for fun: Eat, drink and be merry

One of the things that set Wise Owl apart from other training providers is that they take delegates out for a proper restaurant meal on all scheduled courses. Because who feels inspired and ready to learn after a soggy sandwich eaten in a training venue?

Restaurants are chosen based on the variety of food offered, and delegates are usually asked for their input. This year, it appears the preference was for The Alchemist (I can confirm this is lovely to break up a day's training in SSRS, although think twice before accepting Shaun's drink recommendations here. Drinking tea served with dry ice pouring out of it is more challenging than anything you'll learn on the actual course!)

The rest of the top four are made up of Ask Italian, Ekachai and Byron. 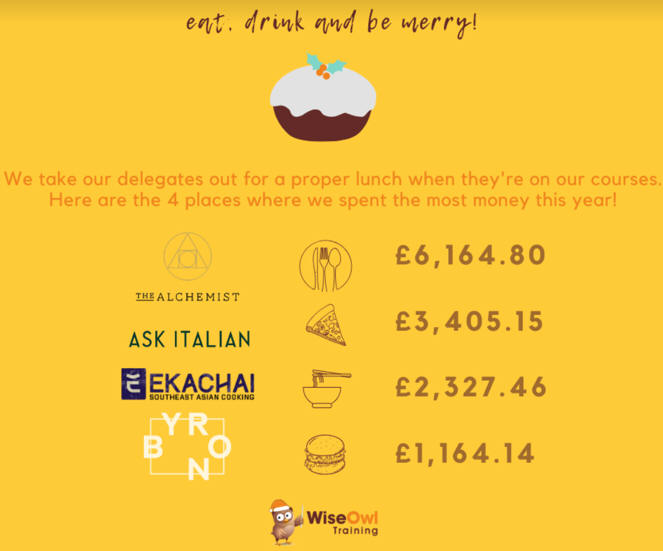 Our delegates are well fed!

Just for fun: Room at the inn

The Owls deliver courses all over the UK, and that invariably means hotel stays. They nested the most in Travelodges, followed by Premier Inn, Ibis and Crowne Plaza. 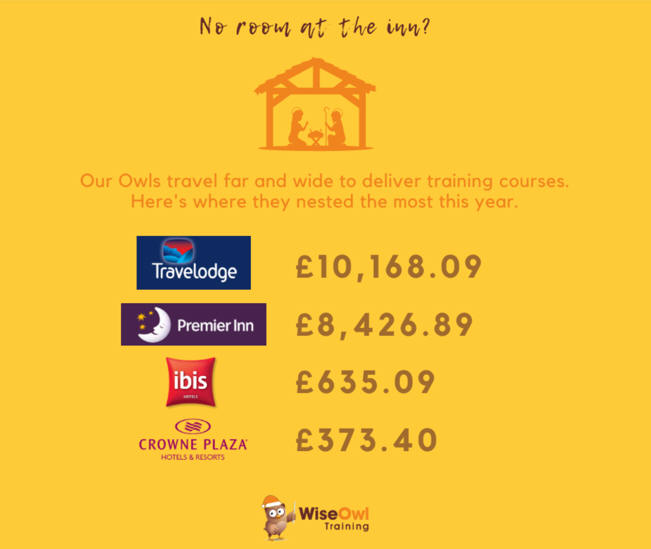 Where will next year take us? Well we already know the schedule (you can see our plans for the next few weeks here), and you can now book your place on a number of our 2020 Microsoft training courses.

But first, the Owls are taking a well-earned break over Christmas. The office will be closing on Christmas Eve and everyone will be back to Wise Owl HQ on Thursday, January 2nd.The first scheduled public course in London is Excel Advanced in London on 7 and 8 January, and in Manchester we have Advanced SQL on 7 and 8 January.

On behalf of Wise Owl, I hope you have a peaceful Christmas!