This month's big story is a huge range of improvements to the Q&A feature in Power BI, with more in the preview pipeline. There are also a built-in PowerApps visual, improvements to data profiling in Query Editor and a new template for connecting to datasets.

The new Q+A visual, and many other Q+A changes

This will be a long page - there are a LOT of changes to the way that Q&A works in Power BI!

Most obviously, there is a new visual in town: 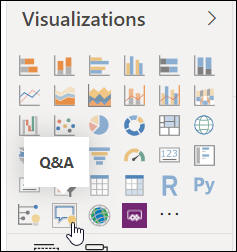 This visual is included within Power BI by default.

If you use any of the old methods to add a Q&A box, they will just add a Q&A visual: 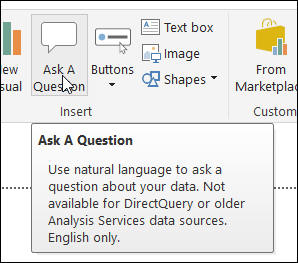 If you click on this tool on the ribbon, it will just create the same visual - as will double-clicking on the background of your report.

A note to Wise Owls - did you know that double-clicking on a report invoked a Q&A box?  I didn't!

When you add a Q&A visual, you get this initially: 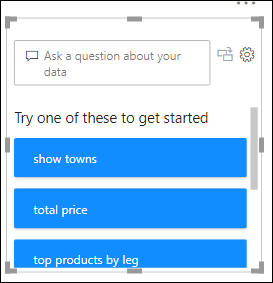 You can type in any question, and Power BI will attempt to answer it.

Here's an example of a question you might ask (I've gone for an easy question here - later on I'll show what happens when your question isn't so well structured): 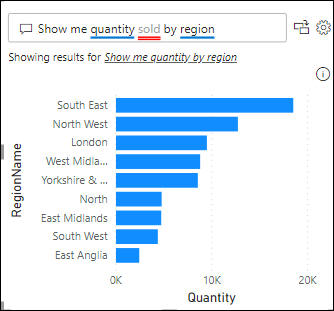 This chart shows the quantity sold by region. Power BI doesn't understand the word sold, and has underlined it in red (more on this later).

A big feature of the new Q&A visuals is that they can be themed, and will interact with other visuals: 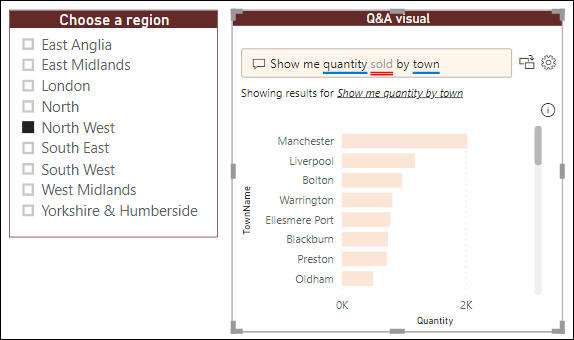 The Q&A visual on the right is showing the towns for the selected North West region, and also showing the formatting from a theme that I've applied.

A Q&A visual shows the visual which most closely answers the question you've asked.  If you tweak the question, Power BI may change the type of the visual, but it will still behave like a static one.

Among other implications of the above is that Q&A visuals will support bookmarks.  For example, I've created two bookmarks as follows: 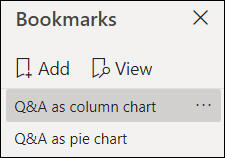 You can click on one bookmark to show my original question in the Q&A box, and another to show the same Q&A question (but this time requesting a pie chart).

Each bookmark will show a different version of the Q&A visual:

Notice that the pie chart bookmark is showing not only a different chart, but a different question too.

I've found one way in which Q&A visuals seem to be treated differently: it seems that you can't (yet, anyway) right-click on them to copy them.

If you ask a particularly good question, you may then want to convert your Q&A visual into its specific type: 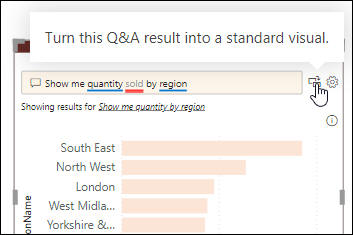 Click on this icon to convert your Q&A visual into a standard one.

When you do this, you get a standard Power BI visual (a bar chart for the above example); 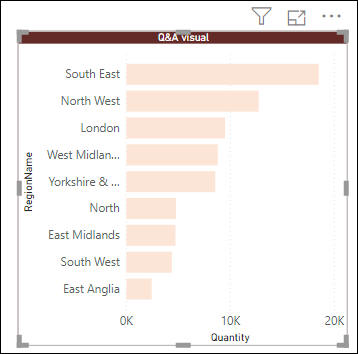 The question has disappeared, and you can now format this as a standard bar chart.

Note the differences between the properties for the Q&A (before) and bar chart (after) visuals:

Don't like the look of your question box?  Change it!

You can change the appearance of the question box and suggestion cards separately:

There are a host of ways in which Power BI tries to get you to ask better questions.  If you type in a word Power BI doesn't recognise, it underlines it (by default in red): 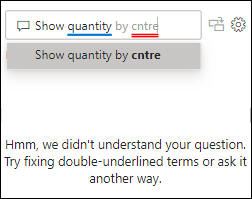 Convinced the word cntre should exist? Add it as a valid term.

So for the above example, you can click on the link shown below to define your new term:

Click to define what you mean by a cntre.

You can now teach Q&A what you mean by your new word: 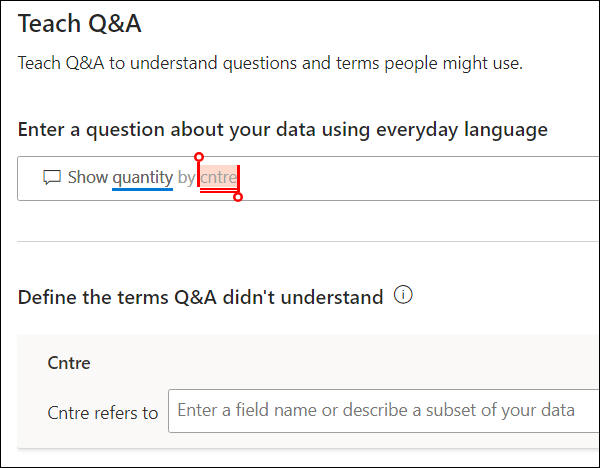 You could achieve the same effect in this case more easily by setting synonyms, a previously existing Power BI feature.

When you type in some phrases, Power BI will come up with a drop list suggesting what you meant to say: 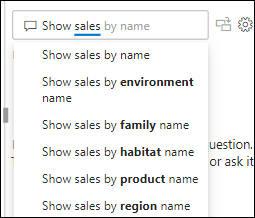 You can choose one of the alternatives listed in the drop list.

You can now use the Modeling view to set a row label for any table (apparently this feature also exists in Excel!): 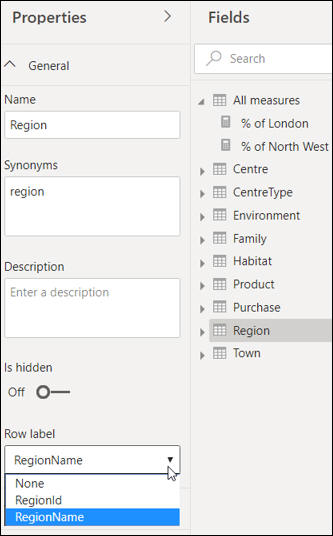 Here I've assigned the RegionName field to be the row label for the region table.

This means that when you refer to the table, Power BI will pick out by default your row label as the field to display: 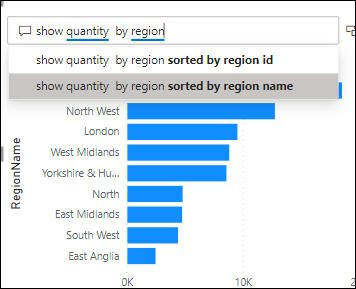 Power BI displays the region name, since that is the row label that you've assigned to the table.

Support for measures tables and other disconnected tables

If you wanted to use the old version of Q&A with measure tables, you often had to resort to creating a separate model specific to Q&A.  No longer!

Well, that's what the update website claims.  As so often with Q&A, my experience isn't quite the same ...

So I've created two new measures in a separate table:

The measures show the percentage of sales represented by the London and the North West regions.

I then created a normal bog-standard table to show that these work:

The figures I'd expect to see.

I want to show this in a Q&A box, so I tried this: 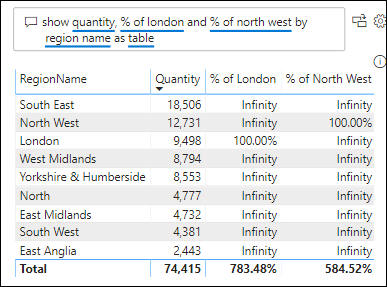 Not only did it take a while to get the question into a format which produced what I wanted, but the answers are wrong and I can't for the life of me see why!

Power BI now gives you the ability to look at the questions users of your reports have asked, and review them (in effect, you can see people's browsing history): 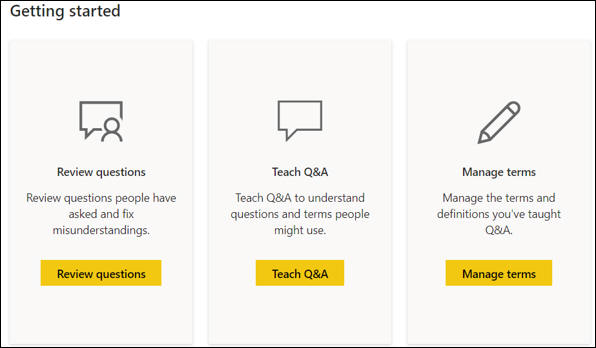 You can review questions asked, teach Q&A new words and review the dictionary of new terms that you've created.

However, I'm not going to review this in any more detail because it's in preview:

The tell-tale link - the feature is in preview, even though it doesn't appear as one of the standard preview options.

In conclusion, I really want to like Q&A, and can see just how much effort Microsoft have put into it, but I still think they'd be better off improving the existing visuals than they would be giving users the ability to create their own on the fly.  I fully accept that history may prove me wrong ...