5 board games worth trying
Sam lists out 5 board games you should try, covering everything from matching symbols to killing zombies.

For most people board games are those things brought out as a Christmas tradition, and normally end in yelling: 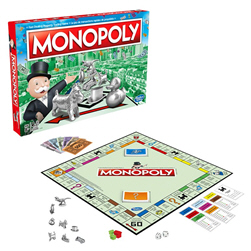 Ah Monopoly ... a crime which it is acceptable to make into a board game!

This doesn't have to be the case! Board games are great for those little pauses before or after dinner to pass the time, and are increasing in popularity. Here are 5 of my favourites, from least to most nerdy.

The premise of this game is really simple: 55 cards each with 8 random symbols on them which you need to match. Each card shares one symbol with every other card : 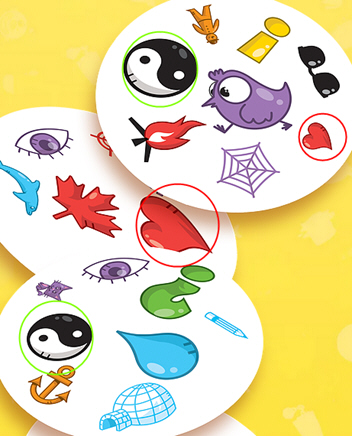 The tricky part is how the symbols move and resize.  Here cards 1 and 2 both have hearts, while the overlap between card 1 and card 3 is the yin and yang symbol.

It isn't just a straight game of snap -  instead, it's a series of mini games with the winner being whoever wins the most games. There is also a more complicated scoring system for the advanced user available on the website as a free pdf.

In this game each player has a single scoring card and in the centre a shared pool of cards. Keep adding to your pile (yelling out the matches) until the centre pile runs dry. Most cards wins!

A great game for up to 8 people (two packs could do 16!) which even comes in a variety of styles, such as for kids (less symbols) or in themes like Harry Potter and Disney.

This is a game in the same vein as Articulate or Codewords, but the twist is that you can use inside knowledge to get clues across. Try to guess your opponents' code without them guessing yours in this team-based code cracker. 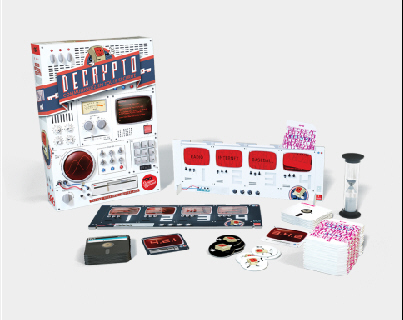 Each team has 4 hidden words on their dashboard (above Radio, Internet, Baseball, Horse) and each turn one person will draw a card with 3 corresponding numbers.

The goal is to get your team to guess the 3 numbers (order matters!) while being obscure enough that your opponents don't get it. For example in the picture the white team drew 3-4-2 as their code: 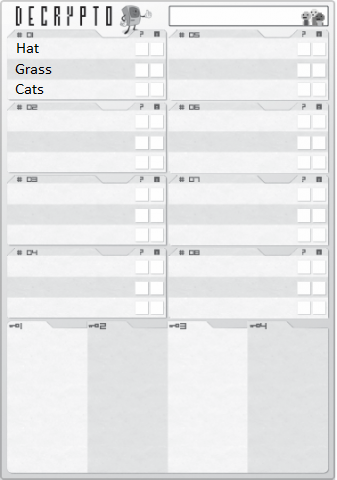 My team who can see the words will hopefully think baseball hat (3), horses eat grass (4) and the internet is full of cats (2).

The bottom of the sheet gives you space to write down your opponents' clues to build up a picture of each category. When you think you know which category each of the new clues describes, you can guess their code. Do this twice and you win!

Evolution: Climate - eat or be eaten, the evolutionary arms race

In the ever changing world some animals do well and some go extinct. Try to eat the most food while avoiding other players' carnivores and surviving the weather.

Each turn the players will donate one card from their hand into the middle. This card will dictate the available food generated but also increase or decrease the temperature. Small animals freeze in the cold whilst big animals fry in the heat.

Your aim is to keep your animal resistant to the weather and protected from other creatures whilst eating the most. This is done by discarding cards to increase your population (so your animals can eat more), size (they can overpower predators) or by spawning new creatures. 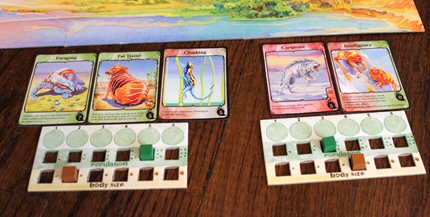 Here the player on the left has grown their population, used foraging to eat more and climbing to avoid predators. The player on the right has become a carnivore and gained intelligence to ignore the herbivore's climb ability.

The difficulty and length can easily be adjusted by removing the weather or adding or reducing the card deck size. One of the few games Andy (a fellow board gamer) enjoyed enough to buy!

Guest note from Andy: it's a great game, which I played a few times with Pippa (youngest daughter), but her carnivores kept eating all my herbivores!

King of Tokyo - Godzilla vs King Kong sponsored by Yahtzee

You are all monsters!  Wait - not you the reader, I meant the players in the game!  Come back! Choose your colossal beast and battle for supremacy in the streets of the world's most (monster) invaded city. 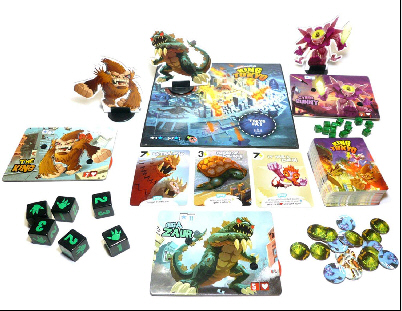 Each player has a health score and a points score on their monster card. These monsters can be upgraded by gaining energy and transforming.

Points are gained by rolling 3+ of the same number on 6 dice rolled each turn. The player in the middle also gains points for being in possession of the city. 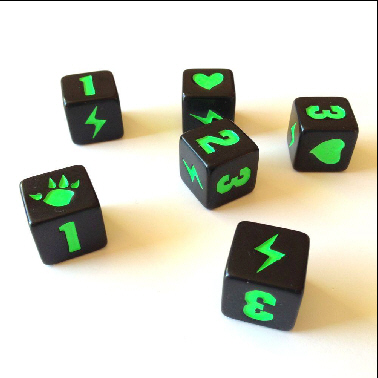 The lighting is currency used for upgrades, the numbers points and hearts let you recover damage. If you are in the city claws will hurt all players not in the city and vice versa.

Win by either getting to 20 points or by killing all of the other monsters to rule supreme. A very simple but fun game for up to 6 players of almost any age.

Zombicide - a board game version of the Walking Dead

This game is a gateway game into miniature gaming, so approach with care as that is an addictive hobby! Zombies have invaded and you are a group of survivors trying to get supplies to survive. 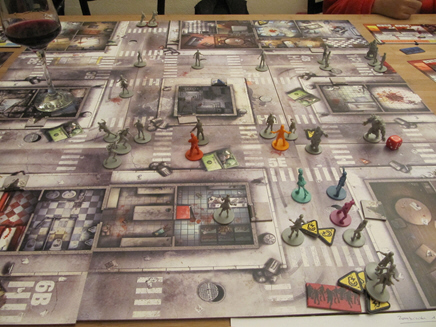 Every turn you can fight zombies, move around the board, loot rooms for equipment or interact with objectives. 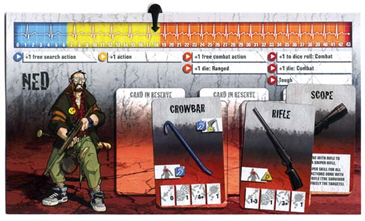 Here Ned has equipped himself with a crowbar for close combat and a rifle for distance. He has killed loads of stuff and unlocked a new skill but his success will mean harder zombies will spawn.

Work as a team to defeat the hordes or risk going it alone and see how long you last. Typically plays up to 6 but can be played solo with one player controlling all the characters.

Check out BoardGameGeek or YouTube for many more amazing games, either co-operative or competitive!