There are big changes to conditional formatting this month (you can display icons, and use percent-based thresholds), but the biggest change of all is the release - finally - of the new filter pane.

Adding icons into the table and matrix visuals

Any frequent users of Microsoft programmes such as SSRS or Excel may have wondered at the lack of KPI indicators in Power BI. Worry no longer, as they have arrived: 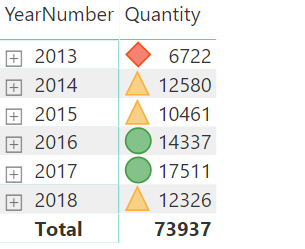 Having always felt that the KPI visual lacked a little something, this owl loves the new feature.

Adding these new indicators is done just like any other conditional formatting under the format options: 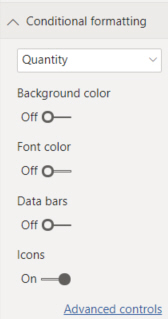 Click the Icons button to toggle it on and underneath Advanced controls will appear. It is possible to have multiple conditional formats on at the same time.

Setting up the Rules works in the same way as any of the other conditional formats. Add each new rule, choosing the icon which you would like it to correspond with:

The reverse icon order option will swap the icons around so that those previously representing the lowest items will now represent the highest.

Within the same window are the options for turnings off the values and positioning the icons both horizontally and vertically:

Icon Alignment could be especially handy when dealing with word wrap.

There are a variety of icons to choose, from including the mysterious No Icon which presumably will go with blank data: 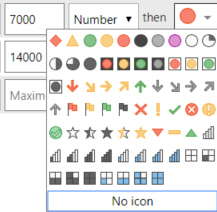 From traffic lights to traditional green ticks and red crosses this has it all. Or does it?

It is possible to use almost any image or gif as an icon for your indicator, but doing this requires creating a measure:

Here each test returns the URL or location of the image to return if the previous expression returns true.

To assign this measure return to the Conditional formatting option and choose Advanced controls under Icon: 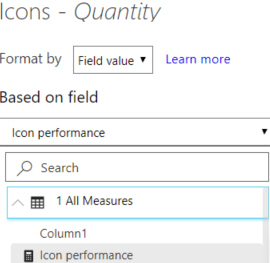 Switch the Format by to Field value and choose from the drop down your measure.

This should change the icons from boring circles to something more spicy: 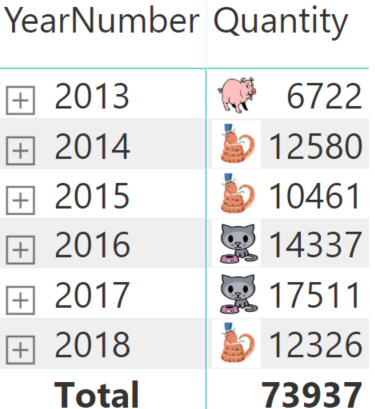 I should probably create a table explaining what my icons mean, but sadly custom legends aren't available.

Without writing some fairly complex DAX there isn't currently the option to distinguish between levels within a matrix. For the above example drilling down will show pigs everywhere, as all month values are below the 7000 threshold.