Although there aren't many changes this month, the ones that there are of unusually high quality. The new look to Power BI is welcome (even if it does mean we have to rewrite all of our courseware), and we're looking forward to using the new conditional formatting options and visual header tooltips.

In addition to the big changes to Power BI Report already mentioned in this blog series, here are a few other improvements worth knowing about.

This is a feature specially for those who don't like the word Total:

You can now change the row and column total labels in a table or matrix.

Here's how you change these labels:

Here I've gone for a more detailed description of what's being totalled. 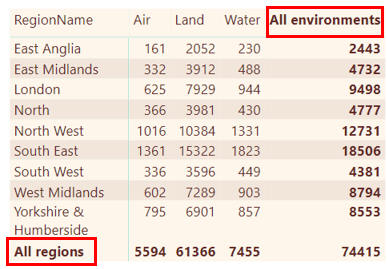 Sorting in the Performance Analyzer pane

In the new Performance Analyzer pane, you can now sort the results: 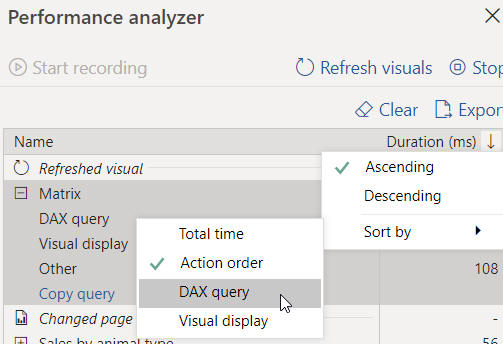 You can sort the results by the total time spent, the order in which the actions occurred (as here), the time spent for each DAX query and (where applicable) Direct Query and the time spent to display each visual.

There's more explanation of what parameters mean, and how to use them.

You can also now hover over function names to see pop-up help text:

Hovering over a function produces text explaining its syntax.

When you're comparing two things in DAX, you can now use the == operator.  I'll let Microsoft explain this:

I admit I've only included this for completeness: even DAX developers probably won't be that interested in this!

Apparently not all equal font sizes actually were equal, as some properties were measured in pixels and some in points.  Microsoft have changed this so that virtually everything is now measured in points:

There are apparently a few hold-outs (such as textboxes), which will be fixed in the coming months.

That noise you can hear is the bottom of a barrel being scraped!