This is the biggest single update for some time, introducing the new modelling view, tooltip styling, single-select slicers and much more besides.

Normally new DAX functions meet quite esoteric needs, but for this update there are a few welcome additions to the core set of functions.

Only read on for this page if you already know how to create measures in DAX - this isn't a DAX tutorial!

Finding text in a string

To make it easier to find whether one string of text contains another, you can now use these two functions:

For example, the following DAX formula could be used to show the number of films with the word Star in the title:

For the Wise Owl Movies database, this could then be used to show this table:

The number of films containing the letters STAR, regardless of case.

And so you can sleep at night, here are the non-science-fiction films:

A classic collection of films ...

A simpler ALL function

If you're removing all of the constraints for the filter context, life is now a bit easier.  Suppose you have this data: 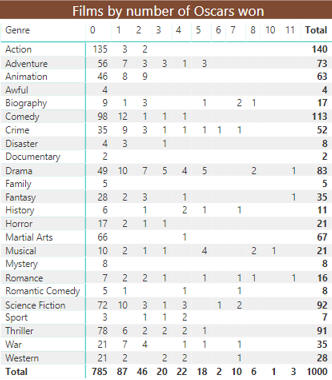 The matrix shows the number of films by genre and Oscars won. Suppose that you want to show each figure as a percentage of the grand total, using a measure. 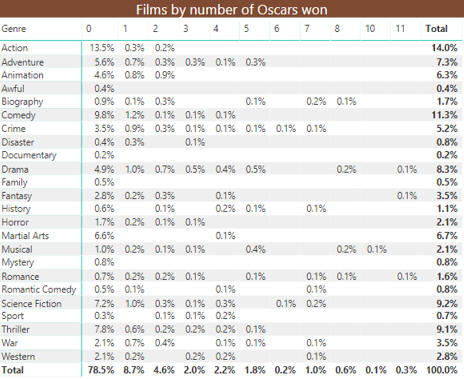 Here's a measure you could use to show this:

// divide the number of films

DAX aficionados will recognise that I've been able to use the ALL function without any arguments.

It's a bit disconcerting using ALL like this, since Intellisense hasn't caught up:

Intellisense suggests that the first argument is compulsory, and underlines your syntax in red if you don't specify it (although the measure still then works).

Other changes to DAX functions

Just for the sake of completeness: