What's new in SQL Server 2017? For SSAS Tabular, lots, it transpires.
Part three of a six-part series of blogs

This blog summarises the main new features of SQL Server for non-administrators (that is, most of us). Most parts of SQL Server get minor changes at best, but SSAS Tabular 2017 gets a host of major improvements.

Not much!  I've listed the new functions under separate headings below.

At last: the TRIM function!

There is one new function in SQL Server 2017 which is way, way overdue - TRIM!

At long, long last - if you want to strip trailing and leading blanks from a string of text, you no longer have to combine RTRIM and LTRIM. SQL Server enters the 21st century!

The string_agg function makes it much easier to combine values of a column from different rows:

The function even supports Intellisense when choosing the column name whose values you want to combine.

So if you have a table like this called tblOwl: 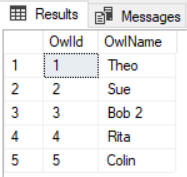 This table contains the names of 5 owls.

Then you could run this query:

-- combine all values of first 3 owls

This would show the first 3 column values, joined together with a comma:

The result of running the above query.

You used to be able to do this by messing about with XML file paths - I for one won't miss this fudge!

Using CONCAT_WS to concatenate with separators

The CONCAT_WS function allows you to join bits of text together, and ignores nulls:

So the query above would show this output:

The null values are ignored.

Use TRANSLATE to replace one string pattern with another

This function is best explained by an example:

-- in a phone number

This query will display:

The query makes 3 replacements, as shown below.

The query replaces ( with [, ) with ] and x with X, avoiding the need to use a series of REPLACE functions.

The fact that the search string and replacement string have to be the same length makes this function of limited use.