What's new in SQL Server 2017? For SSAS Tabular, lots, it transpires.
Part six of a six-part series of blogs

This blog summarises the main new features of SQL Server for non-administrators (that is, most of us). Most parts of SQL Server get minor changes at best, but SSAS Tabular 2017 gets a host of major improvements.

There are more new features in Analysis Services 2017 than in the rest of SQL Server 2017 put together!

All of the new features are specific to using SSAS Tabular (the multi-dimensional model version of SSAS is no longer being updated by Microsoft).

In addition to all of the new features listed above, Microsoft are also deprecating and discontinuing features in both versions of Analysis Services (tabular and multi-dimensional models).  You can see a full list here.  The biggest announcement we can see is that the data-mining features of SSAS multi-dimensional are now deprecated, meaning that they will be discontinued (ie removed) at some stage in the near future.

When creating a new tabular model, you can choose a higher compatibility level:

The highest level of compatibility you can now choose is 1400.

There's a facility to upgrade 1200-level models, but you can't downgrade a model's compatibility.

New user interface for getting data

When you get data, you now see a user interface similar to that used in PowerPivot and/or Power BI Desktop: 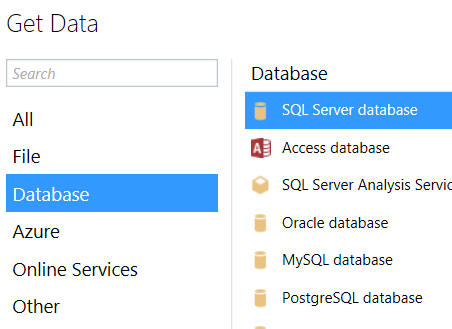 The new way to get data.

You can choose to edit your data before loading it using something which used to be called Power Query: 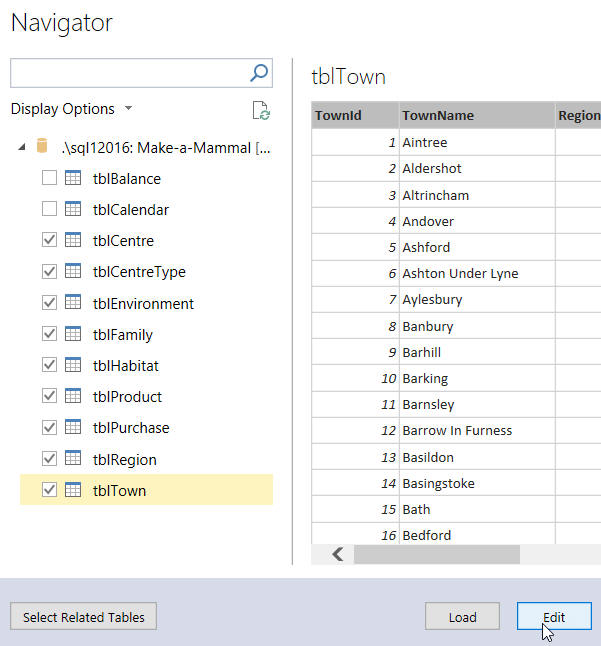 Power Query by any other name (Microsoft describe this feature as the Modern Get Data Experience, suggesting even they can't decide on a new name).

For those who haven't used this in PowerPivot, Power BI Desktop or Excel, Power Query allows you to transform data before you load it into an application, using an underlying language called M.  Note that you can't do this with models upgraded from compatibility level 1200.

You can now hide blank members from parent-child hierarchies

This is a niche feature.  Suppose that you have created a hierarchy:

Within a staff table I've created a management hierarchy, with 6 levels.

However, when you view this in a client tool like Excel, you get some gaps:

Previously you'd have to create complicated measures to hide these if blank.

You can now click on your hierarchy and press F4 to show its properties: 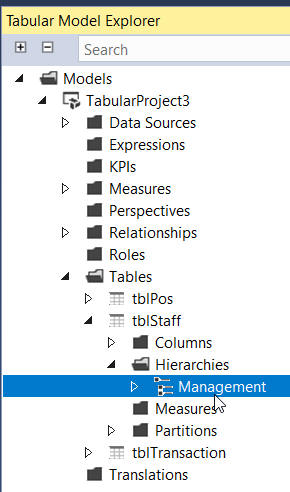 Select your hierarchy in Tabular Model Explorer and choose to show its properties.

You can now choose to hide blank members: 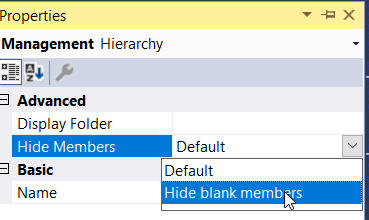 A lot of fuss over a very small drop down?

Pivot tables and the like then look much better:

What you'll see for this example after refreshing your pivot table.

Until now drilling down in a pivot table based on a tabular model hasn't been that rewarding: 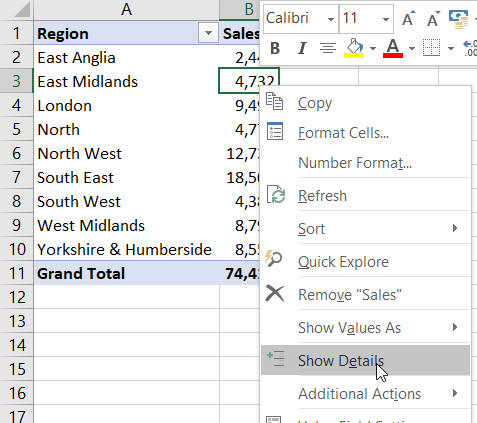 You can right-click on a cell to see its "details", but they may not be easy to interpret.

For the example above by default you get the rows from the ultimate child table, which in this case is a list of purchases made:

The column headings are hard to read, and you have no control over which you see.

Now, you can press F4 to show the properties of any measure:

Any measure like this has properties that you can alter.

You can now type an expression to use for detail rows:

Click on the build button to build an expression.

Here's an example of an expression, listing the town, shopping centre and total sales for it:

So now when you show details for this measure, you see something far more sensible:

You've now got control over the columns displayed.

New IN keyword and CONTAINSROW functions in DAX

DAX now has an IN keyword which works in the same way as the IN keyword in SQL.  For example, this expression would categorise animals into amphibians and other animals:

The keyword actually builds up a table, in this case comprising 3 rows and 1 column.  When filtering, you can use the CONTAINSROW function instead.  For example, this measure will show total sales for amphibians:

The IN and CONTAINSROW functions are - apparently - functionally identical.

We've been clamouring for this for years, but in the end this is a bit disappointing: 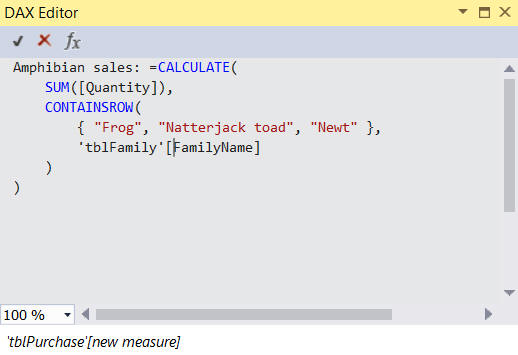 The new DAX editor allows you to split your lines and indent formulae, but that's about it!

In addition to all of the above, the new version of SSAS Tabular model also includes the following changes:

As a conclusion, if you're using SQL Server Analysis Services (Tabular Model) you should upgrade to SQL Server 2017 immediately, I'd say; otherwise, I'd stick with your current version for now.