There's not too much to whet the appetite here: most of the changes are extensions to existing features, such as conditional formatting and column-by-example.

This excellent feature has now got even better!

A reminder of the basic feature

For some months now Query Editor has allowed you to add columns by giving examples to Power BI Desktop: 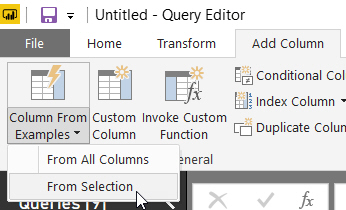 You can choose to add a column then choose Column From Examples to base it on your currently selected columns.

Here's the column selected for this example:

The first few rows are shown - notice that they were all for purchases made in December.

You can type in anything into the first cell or so of the new column generated (often one value is enough to give Power BI Desktop the idea):

Here we've typed in the month name corresponding to the first listed date, which is enough for Power BI Desktop to guess our intentions.

This will create a new column (with, impressively, a sensible name) which you can keep by choosing OK:

Once you're happy Power BI Desktop has got it right, you can choose to keep or discard your new column.

So that's how this feature works.  What's new?

You can now map column values - here's an example.  Suppose that you want to create abbreviations for our four types of shopping centre.  You can type in mapping values for each as below:

Note that there is no rhyme or reason to the abbreviations we've chosen, so we have to type in each one.

The rule created is more sophisticated than you might think.  Here's how you can view it:

You can double-click on the column you've created to see the underlying formula.

Here's what you'll see for this example:

You can perform a similar trick with numbers, to group them into buckets: 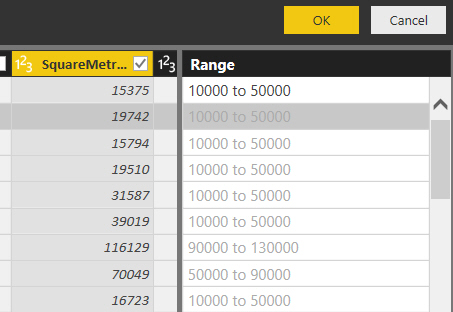 When you type 10000 to 50000 for the first shopping centre's square metres area, Power BI Desktop assigns it to a band and guesses all of the other ones. 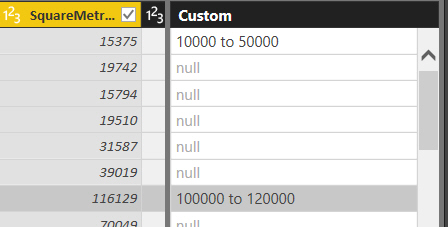 If you type in another band, Power BI Desktop gets lost and reassigns all of the other numbers to null.

There are a few more new things you can do with column by example, but the above should be enough to let you decide for yourself whether this will be useful in your work.