The July 2017 Power BI Desktop updates, including new table and matrix visuals
Part seven of a seven-part series of blogs

This is a bigger update than usual, with the highlight undoubtedly being the official roll-out of the much-trailed new table and matrix visuals.

This is described as a new option for a waterfall chart, but IMHO it's a completely different chart type. 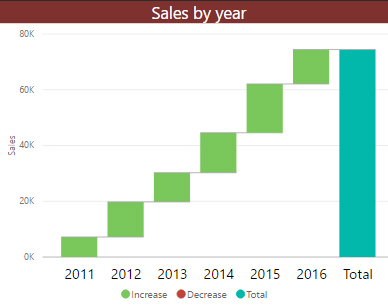 This shows how the final total sales were reached, year by year (had there been any negative contributions - years in which sales fell - these would have appeared in red).

The breakdown feature allows you to see the composition of the increase or decrease in sales between each pair of years, as the following example shows.

Suppose that we want to see which region contributes the most to each inter-year increase in sales: 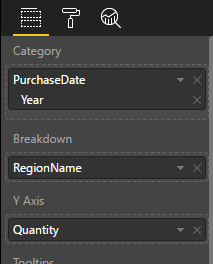 Drag the field whose contribution you want to show into the Breakdown area of the field well.

Here's what you get initially: 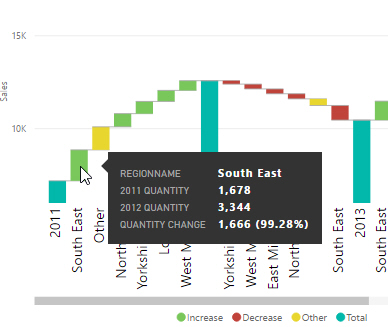 The highlighted bar shows the contribution of the South-East region to the total 2011-2012 sales increase.

Power BI Desktop will pick out the 5 largest contributors for each inter-year gap (although often one of these will be "all other categories", which by default always appears in yellow).

Changing the number of categories shown

Showing the 5 biggest contributors in our chart made it quite wide.  You can change this number as follows: 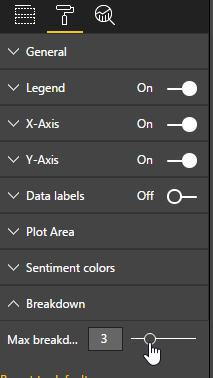 Here's the start of the chart for the setting above: 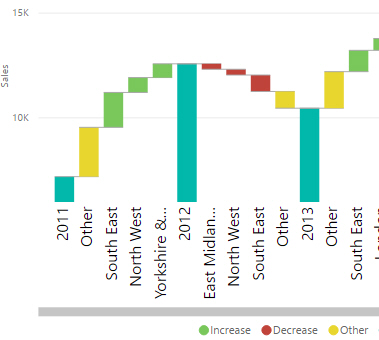 Power BI will always show one more category than the number you choose.

Is this a useful chart?  I have my doubts - it's a lot of information for a humble human to take in in one go!