The July 2017 Power BI Desktop updates, including new table and matrix visuals
Part two of a seven-part series of blogs

This is a bigger update than usual, with the highlight undoubtedly being the official roll-out of the much-trailed new table and matrix visuals.

These have been lurking in preview mode for a few months now, as regular readers of this blog will know, but finally Microsoft have allowed their debutantes to appear on the adult stage: 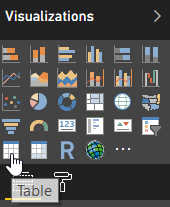 The new table visualisation (the new matrix one is just next door to it).

This blog highlights the main new features for the new table and matrix visuals, but let's start with what you'll see if you open up an old Power BI report in the updated software.

Updating your tables and matrices

I've just updated Power BI to include the July update, and I've opened a PBIX report that I created in the previous version.  This is what you then see: 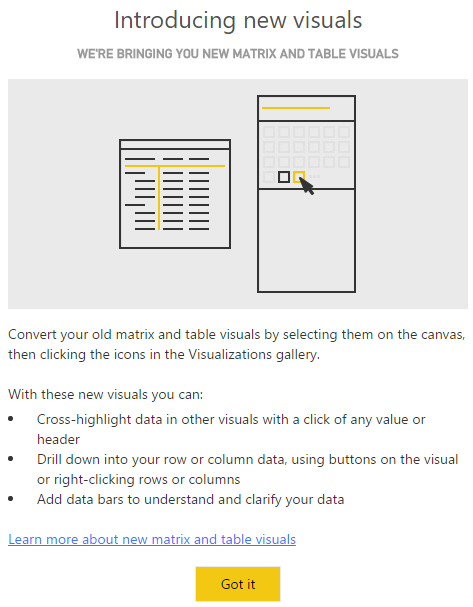 It's easy enough to update your visuals, although you will see changes.

Here's the before and after for my table (I was surprised to see a change - I thought Microsoft would make sure that "legacy" tables weren't affected by the update): 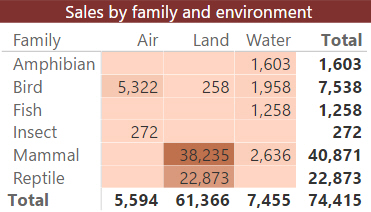 The matrix I created in the old version of Power BI Update.

Again, clicking on the new matrix visual meant I got some extra formatting, and the matrix needed resizing a bit: 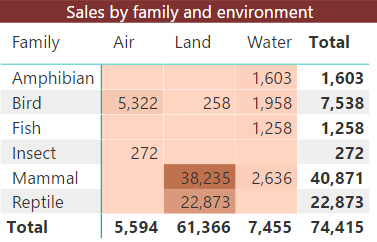 The same matrix, but using the new visual.

The reason for these changes is that the new table and matrix visuals use a style called Default when you first create them (although you can reset this to None if for example you don't like alternate rows appearing in different colours).

Interaction with other visuals

This is the best feature of the new visuals - they support visual interaction, just like charts.  For example, here I've used the CTRL key to select the first three families in a table: 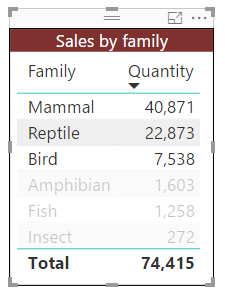 Because I've got the default interaction set for my matrix, I now see it filtered to display just this data: 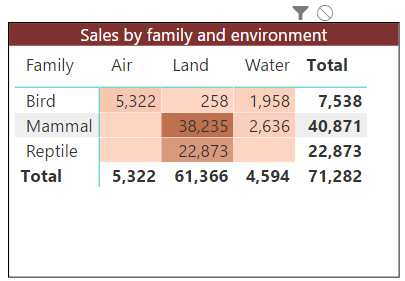 The matrix is filtered to show only the data I've selected in my table.

This will be enough, I suspect, to prompt any current Power BI users to scurry to upgrade immediately!

Drill-down also works, particularly if you have a hierarchy defined:

Suppose that you turn on drill-down as normal, by clicking on this symbol.

You can also use the right mouse button to drill down:

You can alternatively right-click on a figure to show how it's made up.

If you have a hierarchy defined, Power BI will automatically use it to show successively more data: 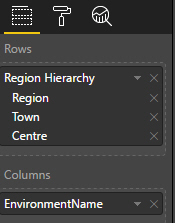 Here I've got a hierarchy displayed for my matrix rows.

So in this scenario, here's what you'll see when you click on a figure:

For the example above, I could click again to see the figures for the shopping centres.  Note that if I had hierarchies set up for both rows and columns, like this: 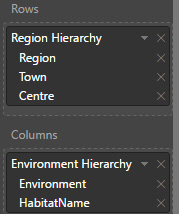 Here I've defined a hierarchy for both the rows and columns in a matrix.

Then when you click on a figure, it will drill down by the dimension you've chosen at top left: 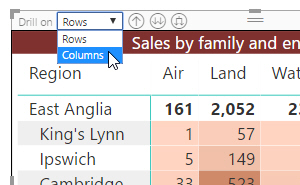 You can choose how drill-down should work.

You can now display data bars in a table or matrix: 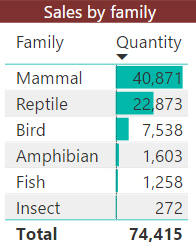 Data bars show you visually how big numbers are relative to each other (they look better in tables than they do in matrices).

Here's how to show data bars: 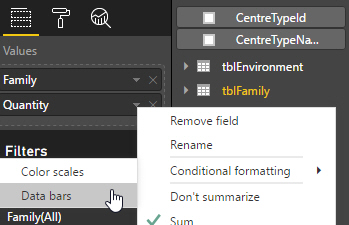 Select a numerical field in the field well, and apply conditional formatting to it to bring up the data bars dialog box.

Here's what the data bars dialog box looks like: 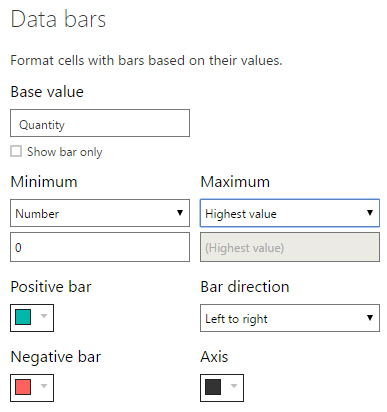 I've set my data bars to start at zero, rather than at the lowest value of the data being represented.

When you create a table or matrix, it gets a new default style, as I mentioned at the top of this page: 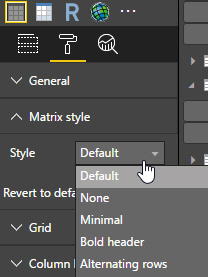 Whether you have a table or matrix selected, the style shows up as Matrix style, and by default is set - appropriately enough - to Default.

Here's what this looks like for a brand new table: 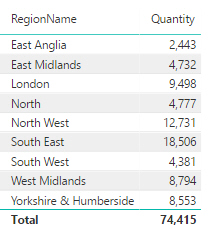 Alternate rows are coloured and the total appears in bold.

You can always reset the table's or matrix's style to None if you want to remove (nearly) all formatting.

Both headers and data in tables and  matrices will now wrap: 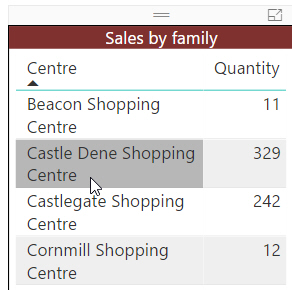 If you enable word wrap for values in a table and make the column narrower, this is the sort of thing you'll see.

There is a separate Word wrap property for column headers and values:

The property for values (the column headers one looks remarkably similar ...).

In the old matrix visual, displaying more than one column took up a lot of horizontal space: 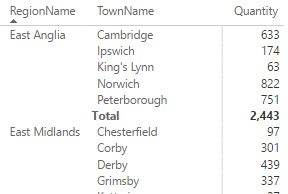 If you included more than one row header, each appeared in a separate column.

You can now choose to set a stepped layout (it's the default for a new matrix): 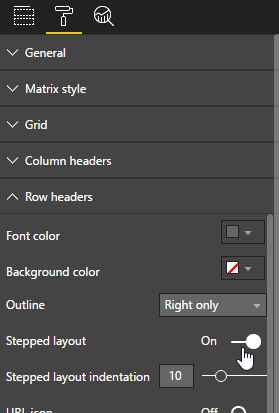 You can specify the size of the indentation used too, by setting the Stepped layout indentation property.

The results are easier to read, as well as taking up less space: 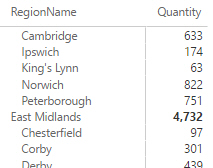 This is the biggest single change in the 8 months since I started documenting Power BI Updates.  Upgrade - and enjoy!