Microsoft have released SQL Server 2012!  I thought I'd blog on the differences for Reporting Services 2012 (and on the SQL language and SQL Server Management Studio in a separate blog).

Summary of Differences for SSRS 2012

The short answer to what's changed in SSRS 2012 is: everything, and nothing.

Everything, because the entire software has been rewritten:

The editing tool is no longer called BIDS, and it runs inside Visual Studio 2010, not 2008.

Nothing, because once you get inside the software, everything looks the same:

Look familiar? It should do if you're used to Reporting Services 2008.

There's one important exception to this rule, which is if you're using Reporting Services within SharePoint.  I'll cover this under a separate heading below.

Do you care about all of this?  Probably not.  SQL Server Data Tools is virtually identical to BIDS (I include the word virtually to cover myself - I haven't yet found a difference).

There's one caveat for the above nothing-has-really-changed summary: SharePoint.  If you're using SSRS within SharePoint, you have two new features available to you.

Wise Owl will be continuing to run standalone Reporting Services courses for the forseeable future, but existing clients are welcome to visit our office to see a demonstration of PowerView and Data Alerts within SharePoint. 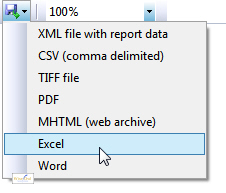 You can now render reports as .docx or .xlsx.

This feature is also included in Report Builder for SQL Server 2012.

Finally, how have Microsoft upgraded Report Builder?  Answer: hardly at all.  As far as I can tell, there is no such thing as Report Builder 4.0 - just a slightly upgraded version of Report Builder 3.0 for use with SQL Server 2012.

I strongly suspect that Report Builder will eventually be left to die out, to be superseded by PowerPivot for Excel.  I'd be surprised if it receives any more significant upgrades.