This update includes some nice new features - for example, creating columns by example and changing chart axis titles. Read this blog for a full list!

This is a great idea, although I enjoyed mixed success when I tried it.  I've included two examples below: one which worked, and one which didn't.

This feature is meant to work like the Fill by Example feature in Excel, which has been around for a while now.

Suppose you've imported a table of films, and you want to find in which year they were made:

It should be straightforward to extract the release year from the parentheses.

So you invoke the new Column from Examples feature:

Here I'm using a single column, but you can get Power BI Desktop to guess how you want to combine multiple columns also.

You can now give your new column a title, and suggest entries for it:

The putative new column appears on the right of your table.

You can now give the column a header, and type in one or more values (I only needed one for this example):

For this example, one entry was enough.

Power BI Desktop guesses what you're trying to do, and fills in the rest of the column values:

If you select OK, you get a new column: 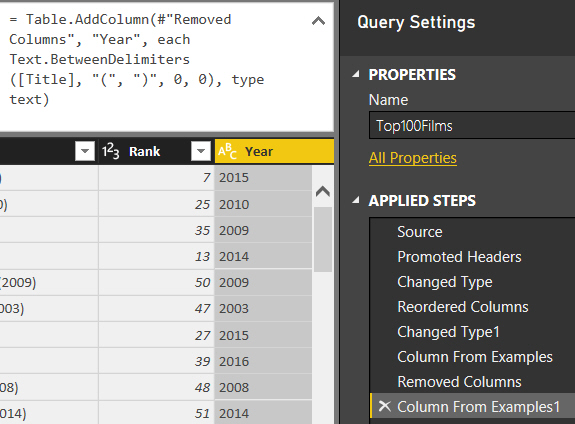 Although the column formula shows up, you can't edit the transform created by double-clicking on it.

All very impressive - let's now have a look at an example where this didn't work.

In fairness, Microsoft say that they are planning on developing this over the next series of updates.

The feature not working

If you try to extract the film name for the above example, this is what you get after typing in one example: 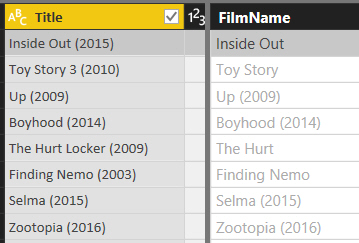 Some film names are there, but some include the year still.

If you type in a second value, Power BI Desktop gives up: 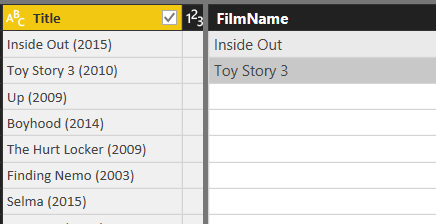 You would think that there was enough information to go on now ...

And so it continues - I tried typing the first five film names in, then gave up.

This is implemented in a really nice way, and for examples where it works will be very useful.