For complex models, this will be a life-changer!  To see how it works, consider this simple model:

We want to use the SpeciesId field to join the two tables together.

If you want to try this yourself, you can download this Excel workbook, then import the data from its two worksheets into a new tabular model.

As always in SSAS Tabular, you can create a relationship by clicking one field and dragging it onto another:

As always, SSAS will sort out which way round the relationship should go.

Analysis Services works out that the species id is unique in the left-hand table but not in the right-hand one, and creates a one-to-many relationship:

You can double-click on any such relationship to edit it: 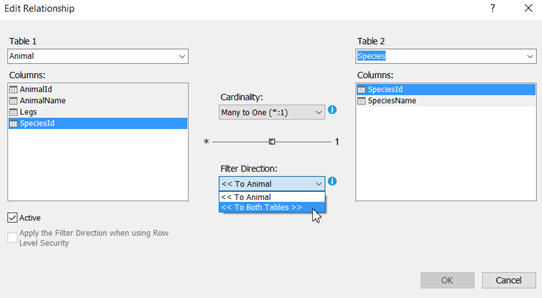 Set the relationship to filter both tables.

To see the effect of this, consider some pivot tables.  For both types of relationship, you can create a pivot table counting the number of animals per species:

This is completely normal behaviour: count how many animals (children) there are for each species (parent).

Because normally the relationship is only one-way, you'd see something fairly meaningless.

With a two-directional relationship, you'd see this:

There is one species which has no legs, one which has two legs and three which have four legs. The numbers don't add up because crocodiles and snakes have different numbers of legs, but are both reptiles.

One of the implications of this is that it's MUCH easier to model many-to-many relationships.  Consider this relationship diagram in a model: 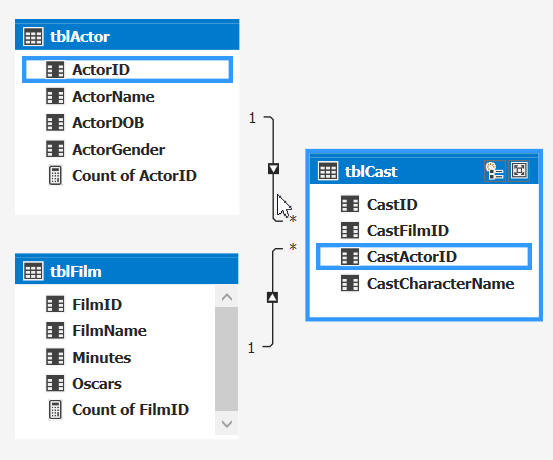 I haven't included the data for this, but the tblCast table links films and actors (it models the fact that one film can contain many actors, but one actor can also appear in many films).

However, I'll now make the two relationships bi-directional as shown above: 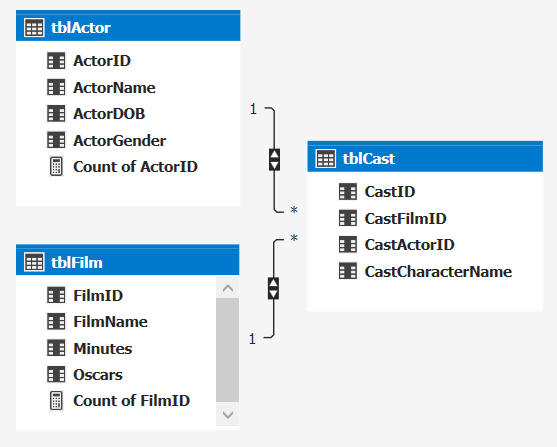 Here I've chosen To both tables for each relationship's filter.

This has saved the messy attempts needed to model many-to-many relationships in SSAS Tabular 2012/2014!