As well as creating measures to aggregate data in tabular models using DAX, you can also write queries to extract data - this blog shows you how!

The DAX SUMMARIZE function is so similar to the concept of SELECT ... GROUP BY in SQL that you may wonder why Microsoft couldn't have merged the two language features!

Syntax of the SUMMARIZE command

In DAX you can summarise by one or more fields in a table, and then show an aggregation for each unique combination of values. Here's the basic syntax:

Table whose columns you want to display,

Name of first aggregated expression,
Expression formula to use for this,

Name of last aggregated expression,
Expression formula to use for this

By far the easiest way to understand this is to look at the examples which follow below.

Summarising by a single column

This query would show the total quantity sold by species:

This query should give the following results:

The total quantity column has been renamed to Quantity sold, as requested.

Summarising by more than one column

The following query would show the number of transactions and quantity sold by species, animal and product:

Here's what you should get when you run this query: 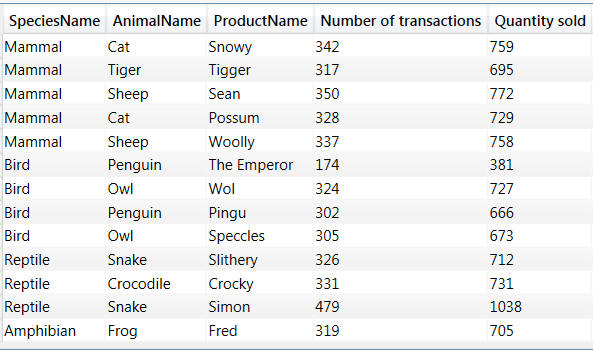 The query groups by 3 columns, and shows two statistics.

Using ROLLUP to get all possible subtotal combinations

Just as in SQL, you can use the ROLLUP function to force DAX to calculate all subtotals and totals.  For example:

-- show total sales for each 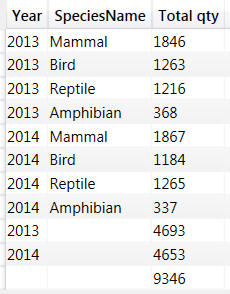 You can include as many or as few columns as you like in the ROLLUP function.

You can use the ISSUBTOTAL function with ROLLUP to determine for any column whether it is being used for grouping, subtotalling or totalling (although you'd have to care a lot more than this owl about the roll-up feature to do so).

So far we've been considering all the rows in tables; what I'll do in the next part of this blog is to show how to filter data.

How would I summarize by date? For example, if I want to sum all sales up till beginning of this month, then sum by every day of the current month - how would I do that?