As well as creating measures to aggregate data in tabular models using DAX, you can also write queries to extract data - this blog shows you how!

This blog explains how to write queries to get information out of a tabular model - and also discusses where you might use these queries, and why!

If you're following through these tutorials using the MAM database, you may find you need to rename some columns and import others in your data model (it'll be obvious when you need to do this, as your DAX query will report an error saying that a particular column can't be found).

What are DAX queries?

This blog has already exhaustively explained how to use DAX measures to aggregate statistics in pivot tables.  However, you can also write DAX queries to list out "rows".  Here's an example:

This simple query would list out all of the rows in the Species table.

This is analogous to the following SQL statement, which would do more or less the same thing:

Where to write DAX

The best place (I think) to write DAX queries is in DAX Studio, if you're lucky enough to be able to use it.  Failing that, you can use Management Studio (SSMS):

Right-click on a deployed model in SSMS and choose to create a new query in MDX (yes, really).

You'll now see a blank query, into which you can type DAX (again, yes, really): 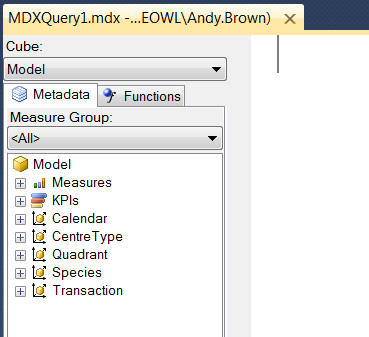 A tabular model is actually deployed as a cube. You can interrogate this using either DAX or (see below) MDX.

You could type in any valid DAX query.  Here's a simple one to list out quadrants:

You can press F5 or click on the Execute button to run this query: 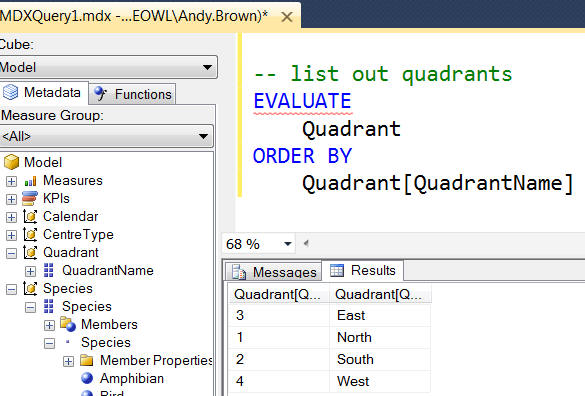 Notice the way that the query parser underlines the word EVALUATE to show it isn't valid MDX (which we knew!).

Not only is there no way to check query syntax using this method, but you can't even drag things in from the explorer window on the left (if you do, the query editor uses MDX syntax, not DAX).

DAX or MDX? A comparison

There are two languages you can use to interrogate cubes:

Which is better?  DAX suffers from the disadvantage that it has more limited support:

Despite this, I would strongly recommend using DAX to interrogate deployed tabular models.  Why?

See this separate blog for how to include DAX within other applications like Reporting Services and Integration Services.

The rest of this blog shows where and how to write DAX ... beginning with a comparison of DAX and SQL.