To create formulae in SSAS Tabular you need to learn DAX, the language used for creating measures. This blog shows the basic syntax of DAX, and explains how SSAS Tabular uses query context in a pivot table to aggregate data correctly.

As mentioned earlier, you create measures in SSAS Tabular using a language called DAX.  This page gives some of the underlying syntax rules.

Some languages are fussy about the types of data (think C#, SQL).  DAX isn't!  The main data types that you can use are the following:

Symbols that you can use

Most of the symbols that you can use in DAX formulae are the same in all Microsoft applications. Here are a few which may catch you out:

Note that you can actually also use the Excel-style AND, OR and NOT functions in DAX to test combinations of conditions.

DAX includes the following main functions to aggregate a column (the ones shown with an asterisk work for numbers and dates only):

An example of an aggregation function in use (DISTINCTCOUNT)

Here's an example of a measure to count the distinct number of quantities bought for purchases: 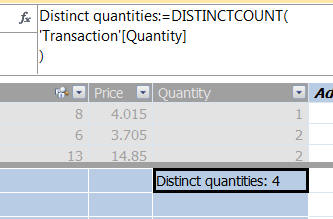 This measure will give the number of different quantities bought. Even though there are 13,904 transactions, all of these were for either 1, 2, 3 or 4 items at a time, so the measure returns the count 4.

The DISTINCTCOUNT function surprises pleasantly on all fronts: itâ€™s new (having been introduced in SQL Server 2012), and itâ€™s fast (much faster than its multi-dimensional model equivalent).

The next part of this blog looks a a special category of functions ending with the letter X, which allow you to aggregate an expression, and not just a column.