Creating calculated columns in tabular models is deceptively similar to creating formulae in Excel. Deceptively, because the underlying language (DAX) is completely different, and you can make use of functions like SWITCH which have no Excel equivalent. This blog shows what calculated columns are, and how to create them.

Making choices (the IF and the SWITCH functions)

Suppose that you want to categorise purchases into the following 3 bands:

(For overseas readers, a pound is just like a dollar, but better).

There are several ways to create these categories.  This blog shows two: using an IF function, and using SWITCH.

You can also use the EARLIER function to achieve the same result, as shown in a later blog.

Before we begin - doing the categorisation in SQL

If you know SQL and have the right to create views in your database, the easiest way to solve the above problem is to use a CASE ... WHEN statement:

-- work out the category

This would give the following results:

You could then import the view created by this SQL into your tabular model, avoiding the need to create a calculated column.

This works in exactly the same way as the IF function in Excel.  The syntax is:

However, this can only take us so far:

Here we've catered for the situation where the price is less than 5 pounds, but we still need to distinguish between the other two cases.

The solution is to embed one IF function within another, although it doesn't look pretty!

Here's what this would give:

The different categories are calculated correctly.

To avoid nested IF functions, you can use the more powerful SWITCH function, which allows you to include multiple comparisons:

The syntax isn't obvious from this!

This is much easier to understand with an example, so let's use the one above: 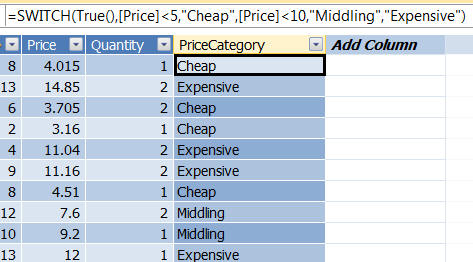 This formula returns the same price categories as did the nested IF function above.  The arguments are explained below.

The first argument in a SWITCH formula is often TRUE(), since you're often trying to find when a particular condition first becomes true.

Here's what the above formula means:

One final note about the SWITCH function - internally it's converted to a nested IF function before running, so it won't actually save any processing time.