If you're developing software, should you use old-fashioned but reliable WinForms, or the exciting new concept, WPF?

WinForms or WPF - from a Project Manager's Viewpoint

If you're responsible for bringing in a project on time and within budget, I wouldn't touch WPF with a bargepole.  Here are 2 reasons why. 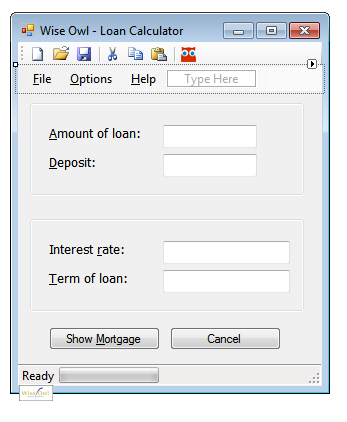 A simple form for creating a mortgage application.

This was created in WinForms.  It's got everything a form needs, including:

Anything more is not going to make the application any easier to use.

The form was created by dragging controls onto a blank screen and positioning them where you wanted them to go.  No worrying about brushes, pens, stack panels, grids, dock panels and all of the other paraphernalia of WPF.

If you don't need pretty forms, don't commission them.  If you give your developers WPF to use, you're going to get lots of window-dressing!

Here's a summary of Windows Forms and WPF, with notes on which type of developer each will appeal to:

If you want a project building in WinForms, there are legions of VBA, VB6 and Windows Forms developers out there waiting to help you!

I should stress that once you've drawn your form, the code to make it work is similar in both WinForms and WPF.