If you've ever had the tedious job of manually scrolling through a long list of data to remove the duplicate entries in Excel then this blog is for you! Discover how to hide or delete duplicated data in Excel 2003, 2007 and 2010.

In Excel 2007 Microsoft introduced a dedicated tool for removing duplicates, cunningly called the Remove Duplicates tool.  Using this tool is relatively simple but is still worth a look at how it works.  In the diagram below is a short list of films:

The duplicate entries are shaded in green - we want to get rid of two of these rows. 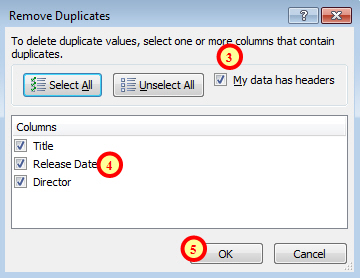 When you click OK you'll be presented with a dialog box telling you how many rows have been deleted. 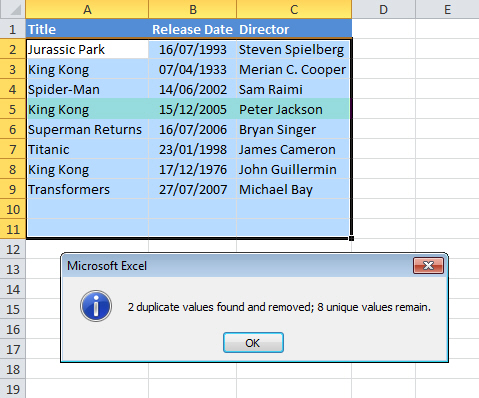 The dialog box tells you how many rows were deleted.

Take care when removing duplicates using this method because the duplicate rows are deleted from the list rather than simply hidden as in Excel 2003.

Removing Duplicates When Some Columns Have Different Data

Sometimes you will want to remove duplicate rows from a list where not every column contains the same information.  Look at the example below:

You can choose to omit certain columns when Excel compares rows to determine which records to delete.  For this example we'd use the settings shown below: 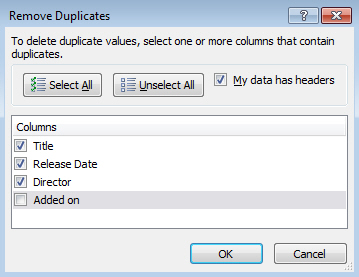 Here we'd simply choose not to include the Added on column when comparing the rows.

The end result is that we'd delete the rows where only the Title, Release Date and Director values are the same. 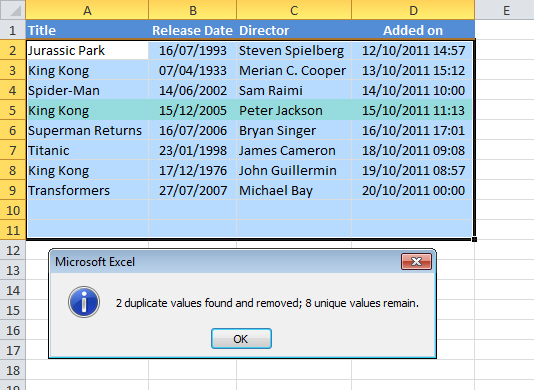 Excel keeps the first instance of the rows that contain duplicates.

If you weren't sure that you wanted to delete your duplicate values but would rather hide them instead, you can still use the same technique that works in Excel 2003. To do this:

You'll see the same dialog box as in Excel 2003. Simply check the Unique records only box to hide the duplicates rather than delete them.

And that's the end of this blog!  There are lots more resources on training in Excel here.