What is a Variable?

In the example shown in part one of this blog, we want to store the name of our superhero and the rating applied to them somewhere on your computer which is easy to access and use.  That somewhere is called a variable.

A variable is a bit like a suitcase, in that it stores something.  But there are two big differences: suitcases don't (usually) have names, and they're not restricted to storing just one thing.  So if you're the sort of person who names their suitcases and stores just one thing in each, you'll find variables strangely familiar! 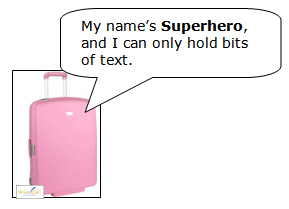 Our variable to hold the superhero name. 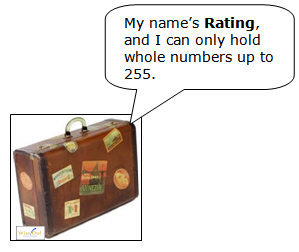 The variable to hold the rating.

So know we know what variables are (!) - how to create them?