Useful Things to Know about Variables

A couple of miscellaneous things which will make your coding life much more efficient!

Moving to and from Variables

SHIFT + F2 and also SHIFT + CTRL + F2are useful keys for moving to and from a variable definition.  Here's how they work: 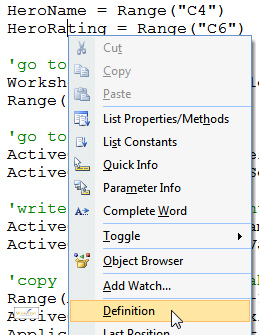 Right-click anywhere on a variable and choose the option shown to go to its declaration (or just click on the variable and press SHIFT + F2).

When you go to a variable's definition, Excel VBA highlights the variable in question:

Excel takes you to the definition of the variable and highlights it.

The case of a variable (whether it appears in capitals, lower case or some combination of the two) is entirely determined by the DIM statement declaring it:

There is no point typing in herorating in the correct case ...

... because Excel VBA will correct it for you when you move off the line.

This means that any changes you make to case in a DIM statement propagate through your entire procedure's code:

The net effect of the above is that you should type variables in in lower case - it's quicker, and VBA will correct the case for you when you press ENTER.