The Scope of Variables

Variables have different scope, according to where and how you define them.

The variables we've seen so far have scope limited to the procedure in which they're defined: 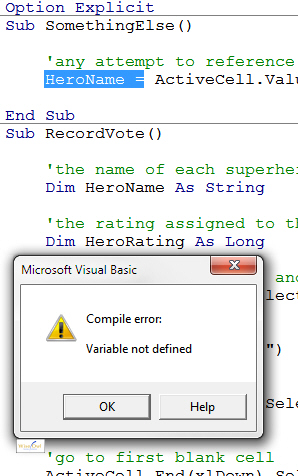 In the top subroutine called SomethingElse, any attempt to reference HeroName will fail, since it is defined within the separate procedure RecordVote and hence is local to that.

Most variables that you create will be locally defined within a single subroutine like this.

Public Scope for a Module

The next level of scope is to declare a variable at the top of a module:

'the name of each superhero

'the rating assigned to them

'go to the votes sheet and get the value of the superhero, and their rating

In the code above, HeroName and HeroRating are defined across all procedures within this module.

Dim and Private mean the same thing in the above context.

Highest Scope - Public to All Modules

Sometimes you'll want a variable to be available to all procedures in all modules in a workbook.  Here are some examples:

Note that the word Global is old-fashioned, but is still supported - you should use Public instead by preference.

If you're using public variables, you may instead want to create them as constants instead - the subject of the last part of this blog.