Why you should Declare All Variables

The example on the previous page would run just as well if you didn't declare your variables:

In the above case, VBA will reach the first two lines creating variables:

Because you haven't explicitly declared HeroName and HeroRating, VBA will create them on the fly for you, giving each the type Variant.    So far, so good?

Well, yes - until you mistype a variable name.  Here's what would happen for a simple mistyping:

The problem above could be avoided so easily, if you could just tell VBA that wherever you use a variable, you have to declare it.  Read on!

The solution to the above problem is to include two magic words at the top of each module - Option Explicit:

'the name of each superhero and their rating

'the rating assigned to them

'go to the votes sheet and get the value of the superhero, and their rating

Here's what you get if you run the above macro now: 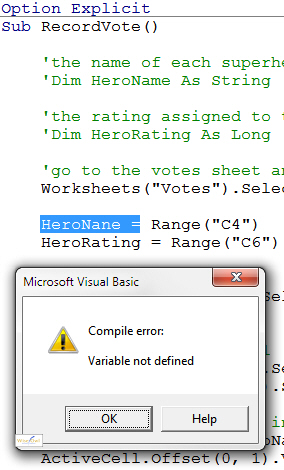 The result of running the macro.  VBA highlights the variable you've misspelt, and tells you that it's not defined.

Setting the Option to Require Variables as a Default

Given that forcing yourself to declare all variables like this is such a good idea, how can you avoid having to type in Option Explicit at the top of every new module you create?  Here's how! 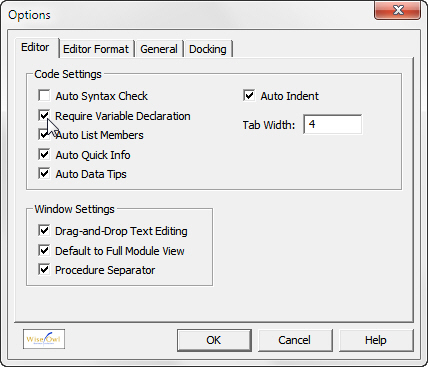 From now on, every time you create a new module it will have the words Option Explicit at the top, and you'll have to declare any variables that you use.