The aim of this exercise is to be able to filter a cube: 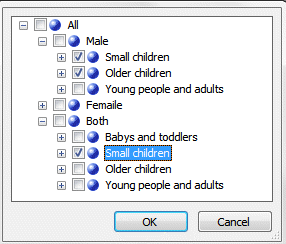 When you browse this cube using the filter shown above, it should show the following quantities of products purchased by region and age band:

The figures you should get for the filter above

If yoiu're using Analysis Services 2012 or later, you'll need to analyse your cube in Excel to see a pivot-table-style view of it similar to the one shown above.

To create this cube:

Note that you won't be able to get rid of the wavy line underneath the Products dimension hierarchy you create, since the underlying relationships don't exist:

You should now be able to create, filter and browse the cube as shown at the start of this exercise!