Create a new project, and within this the following new data source view: 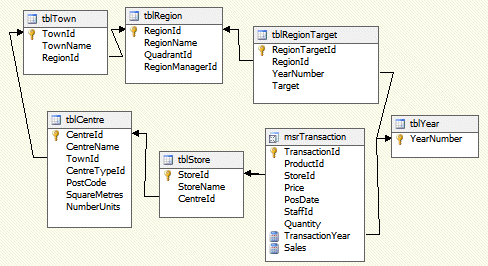 You'll need to create some of the relationships, and also create two new calculated members as shown below

Within the msrTransaction table, you'll need to create two new measures: one deriving sales (Price times Quantity), and one giving the transaction year (use the YEAR function on the PosDate column).

Create a cube based on the two measures shown below (and create a folder name called Shiny New Measures for one of them): 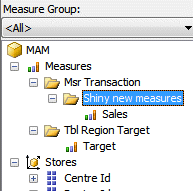 The two measure groups each have one measure in them

Browse the cube and build it as shown below:

If yoiu're using Analysis Services 2012 or later, you'll need to analyse your cube in Excel to see a pivot-table-style view of it similar to the one shown above.

Check the Dimension Usage tab of the Cube Designer is correct, then close down all open windows.